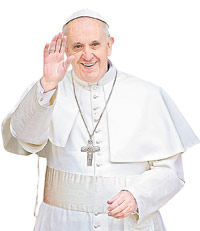 08 November, 2014
Print this article Font size -16+
Apart from performing his spiritual duties, the new pontiff of the Catholic church Pope francis (jorge Mario Bergoglio) will have some pressing earthly tasks to carry out. Especially the  one involving the embattled Vatican Bank, which has an estimated $8.2 billion (2011) in assets. Can the 76-year-old Argentine achieve what his predecessor set out to do?
Maduro’s Inheritance
If things go as planned, he will be the one who will control Venezuela’s oil assets. Nicolas Maduro is the anointed heir of Hugo Chavez, the recently deceased near-despotic ruler of the south American nation. Maduro is expected to win Venezuela’s upcoming presidential polls. But what awaits him is the herculean task of cleaning up (well, only if wishes to) a Stygian stable. Venezuela’ suffers from a dysfunctional economy and rising crime rates.
Red Commander
China’s new head of state Xi Jinping has taken office in the Great Hall of the People in Beijing. The 59-year-old leader, who has replaced Hu Jintao, was nominated to the top job in November and has, ever since,
been waging a battle against corruption in the system. Xi began his rise in Chinese politics in the 1980s and held a series of  jobs in local bodies. In 2007, he entered the Standing Committee,  China’s top decision-making body.
Like This Post?
Facebook COO Sheryl Sandberg is no ordinary top executive. So when she writes a book, one better take note. Sandberg’s debut work, Lean In, which saw a big fat launch last week in the US, talks about women and, yes, work. Narrating a series of workplace tales, she urges working women to start believing in them­selves.
Diplomat In The Dock
With the Supreme Court of India restricting Daniele Mancini from leaving India, the Italian ambassadador has become a star of sorts, though for all the wrong reasons. The court also issued him a notice over breach of an undertaking to bring back the two marines who are on trial in India for killing
two fishermen from Kerala in February 2012.
Wholesale Shift
Retail baron Kishore Biyani plans to launch a wholesale cash-and-carry chain in a tie-up with Hong Kong trader Li & Fung, which holds a 26 per cent stake in Biyani's Future Group logistics business.
Google Shuffle
Chennai-born Sundar Pichai will head Google's Android division. An IIT Kharagpur alumnus, Pichai takes over from Andy Rubin, who had started Android Inc, which Google tookover in 2005. Rubin  has stepped down at a time when the mobile operating system is growing faster than ever. Pichai joined Google in 2004 and in 2011 became senior vice-president of Google Chrome and Apps.

Speaking about Pichai, Google CEO Larry Page said via a blog post, “Sundar has a talent for creating products that are technically excellent yet easy to use — and he loves a big bet.”