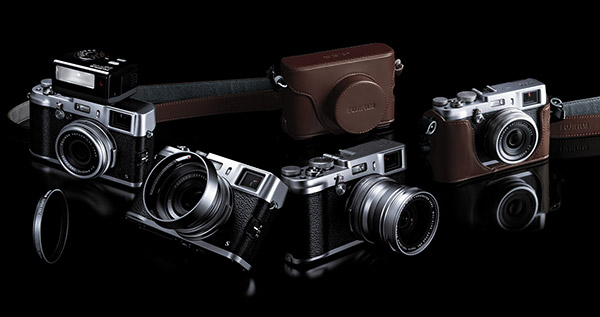 08 November, 2014
Print this article Font size -16+
I am tiring of hearing regular obituaries for the camera, of how the smartphone has killed either the point-and-shoot or the DSLR or the hybrid camera, depending on whom you ask. Take a look at the three models we have at hand today – the Fujifilm FinePix X100S, the Canon EOS 700D and the Sony Cyber-shot WX300 — and you’ll be hard pressed to find smartphones that can match the versatility that these guys can offer.

Fujifilm FinePix X100S
Retro is the mantra over at Fujifilm, with the company pushing out one great retro-styled camera after another. Visually very similar to the X100 I’ve reviewed a while back, the X100S has a very 1960s chic going for it and feels solid and well constructed. With its brushed metal and faux leather, it’s a modern take on a rangefinder you’d expect to see in the 1970s.

Yet, retro is only surface deep, and within the camera beats a modern heart — most notable of which is the hybrid viewfinder, which overlays a ton of shooting data over a regular viewfinder. The ability to put even the menu into the viewfinder, ensures that this camera never leaves your eye when shooting. Really feels like you’re looking through an Iron Man heads-up-display! A bunch of other features, such as multiple exposures, AE Bracketing, film simulation, panoramas and HD Video functions, ensure that this is very much a 2013 spec camera. Of course, bear in mind - as with the elder brother, some may feel limited by the limited perspective that the fixed-focus 23mm f/2.0 lens offers, while others (myself included) may find that this forces them to be more creative with their image composition.

In use, the X100S takes a very manual and mechanical approach, with aperture, shutter speed and a ton of other settings adjusted via hardware dials and switches, not flicking through some menus as is the case with many point-and-shoots. This really makes it easy to get to some of the functions on the camera one-handed and while you’re peering through the viewfinder.

In any case, what makes it all worth it is the sharp-as-nails images that the X100’s DSLR-sized sensor pushes out. Images were relatively free of noise even for sensitivity levels as high as 3200, and colors were accurate to a T. Plus, this baby is fast and very responsive, ready to focus from the word go. I took this along with me on a vacation and left my DSLR behind, and had zero regrets. Of course, if zoom is critical for you, this camera’s out.

The question is — at this money, is this a DSLR replacement as the price might suggest? Absolutely not. There’s a lot to be said for the versatility that interchangeable lens gives you, and the X100S will not change that no matter how good the images are. Yes, if you’re looking to rekindle the pure joy of photography and have a ton of cash spare rotting away in your bank account, go for it. A pro-photographer who’s used this camera correctly describes this as 80% of a Leica at 20% of the cost, which is about as accurately as I can describe it!

Canon EOS 700D
The EOS 700D easily assumes the flagship role in Canon’s consumer DSLR camera line-up, coming off the back of the successful lineage of the 650D and the 600D. The 700D ticks off the checkboxes for a current-gen consumer DSLR, and headline features include a 18 megapixel APS-C sensor, a vari-angle touch screen LCD, full-HD 1920x0180-pixels video shooting, and a respectable 5 frames per second continuous shooting speed. Low-light shooters will be happy to note that the camera handles high ISO sensitivity levels with some degree of élan and noise levels are well controlled. Controls are laid out in an easy-to-use manner, and the 3.0-inch LCD screen allows for great flexibility – flip it out parallel to the body, angle it up or down, or towards yourself for self-portraits. And in a world crazy about Instagram-ming their every photo, the 700D adds in consumer-friendly Creative Filters - Grainy Black and White, Soft Focus, Fish-Eye, Water Painting, Miniature Effect, among others — which can be previewed on the screen when shooting in Live View mode, and can be applied to both JPEG and RAW files either before or after taking the picture.


Picture quality wise, the genes of the hugely successful 650D run strong, with color-accurate, rich in detail images the order of the day straight out of the box with the EOS 700D. If at all, the only complaint with the 700D has to be that it is a very minor upgrade on the Canon EOS 650D, down to even using a similarly specced sensor. The inclusion of Wi-Fi for wireless shutter control and image transfers would have been welcome, and it’s a shame Canon’s didn’t do more with the 700D. Nevertheless, the 700D is a good buy for folks looking for a competent non-pro DSLR, one that will see you through many years of use ahead.

Sony Cyber-shot WX300
Think superzoom, and most of us think of DSLR-like portly form factors, don’t we? The Sony Cyber-shot WX300 turns conventional thinking on its head, with a 20x optical zoom in an eminently pocketable and petite 96 x 54.9 x 25 mm frame. That’s a 25-500mm zoom in something that’s half the size of other superzooms! There is a downside to this though — its slim dimensions result in you having to put in extra effort to avoid camera shake when the zoom is fully extended. Keeping the camera steady at 20x zoom is hard enough indeed even with the image stabilization, add in the 40x digital zoom and things really start to get out of hand (quite literally)! It's not that the Sony WX300's image stabilization doesn't work, it's just that coupling such a long lens with a body this small means that even a tiny movement of a hand can translate into a massive image wobble at the longer end of the zoom. A bit of a “you win some, you lose some” of a case here.

Under the hood, it packs in a low-light-friendly 18.2 megapixel Exmor R sensor that can let you shoot at 10 frames per second in burst mode and full HD videos. Sony’s added in a full complement of shooting modes and picture effects, some of which are handy but all of which are a little fiddly to get right given the size of the LCD screen. Wi-Fi is built-in and allows you to transfer your images and videos to a smartphone or tablet and allows your mobile device to act as a remote control. To use the Wi-Fi functionality on the Sony WX300, you will need to install a free PlayMemories app which then lets you transfer images and videos and even use the app as a remote shutter, along with zoom and timer control.

That said, image quality isn't the best and images aren't as detailed as I’d have liked. However, if you’re looking for something that’s easy to pocket and great for taking casual pictures and sharing online, the WX300 makes for a great buy.