Mumbai (Maharashtra) [India], September 27 (ANI): Piquing the excitement of fans, actor Pankaj Tripathi on Sunday dropped an intriguing poster from the much-anticipated web-series 'Mirzapur 2.'
The 44-year-old star shared the dark poster of 'Mirzapur 2' on Instagram. It showcases the grim reality of the city of bloodshed and guns- Mirzapur.
The poster features an open jeep, parked on the pavement, with a number plate that read' King of Mirzapur', while the frame captures the view of a dead person, lying on the ground with a pistol in his hand which is shown covered in bloodstains. In the backdrop is the castle of 'Kaleen' Bhaiya the master of the city. 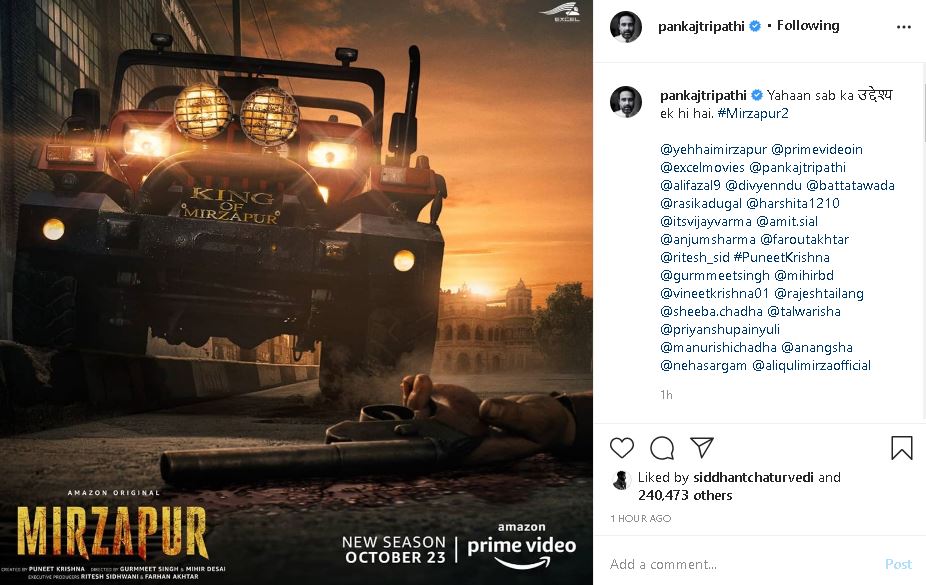 "Yahaan sab ka uddeshya ek hi hai. #Mirzapur2 (Here everyone has the same objective. # Mirzapur 2)," wrote Tripathi in the caption.
'Mirzapur' is the story of Kaleen Bhaiyya, the King Of Mirzapur vs the Pandit Brothers, Guddu, and Bablu. What initially begins as a battle for power, leading to the throne of Mirzapur, eventually shapes the destiny of the city, influencing its business and its politics.
While Season 2 of' Mirzapur' is all set to premiere on 23rd October, fans can binge-watch Season 1 and enjoy the world of 'Mirzapur' while they wait for the second season to drop.
Fascinating viewers in a terrific first season, the show featured Pankaj Tripathi, Ali Fazal, Vikrant Massey, Shriya Pilgaonkar, Shweta Tripathi, Rasika Duggal, and Kulbhushan Kharbandha in the lead.
While Tripathi stole the show essaying the role of Kaleen Bhaiyya, the King Of Mirzapur, Ali Fazal & Vikrant Massey packed a punch as Guddu and Bablu Pandit - the wannabe gangsters.
Joining them in Season 2 are Vijay Varma, Priyanshu Painyuli, Isha Talwar, Amit Sial, Anjum Sharma.
With all eyes firmly fixed on what happens next on the show, the makers have kept everyone's curiosity high by not revealing much about the story.
Produced by Farhan Akhtar and Ritesh Sidhwani under their banner Excel Media and Entertainment, the second season of Mirzapur will premiere on October 23 on Amazon Prime Video. (ANI)