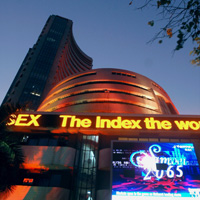 But in India, optimists prevail. Analysts do not believe these latest developments can hurt Indian stockmarkets for too long. The latest round of concerns has given investors a chance to cash out on the back of strong gains they made since the beginning of September. "I consider it as a healthy correction," says Kishore P. Ostwal, managing director of Mumbai-based CNI Research. "Markets have provided investors a good opportunity to take positions. There is no reason to expect that markets will continue to fall considering foreign institutional investors' (FIIs) buying is going to be strong."

Analysts say the crash in Chinese markets has more to do with disappointing economic data that could lead to further tightening of interest rates — the Bank of China raised its policy rate by 25 basis points to 5.56 per cent in October. The Chinese consumer price index grew by 4.4 per cent in October, compared to 3.6 per cent in September. Industrial production data in China also slowed marginally — to 13.1 per cent year-on-year in October from 13.3 per cent the month before. Like all mild forms of flu, this too, they say, shall pass.