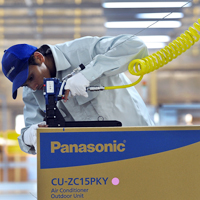 08 November, 2014
Print this article Font size -16+
The Japanese consumer electronics company Panasonic Corp may be struggling with heavy losses internationally, but it  continues to bet big on India. On 12 December, the company expanded its presence in India by inaugurating its sixth facility in Jhajjar, Haryana — one of its largest unit so far in the country. The 76 acres of land will be a production hub for split air conditioners, full automatic washing machines and industrial tools like welding and cutting machines.

“There was a gap between supply and demand, and we were not able to supply to India market as we wanted to,” says Manish Sharma, India Managing Director of Consumer Product Division.

For Panasonic, India is one of the high growth markets in Asia Pacific with contribution of about Rs 5,500 crore of revenue last fiscal. It is estimating a turnover of Rs 10,000 crore in fiscal 2012.

For the first five to six months, the company will produce for the Indian market. However, it will gradually start supplying to West Asia and Africa. By 2013, five per cent and by 2015, 20 per cent — of the products manufactured in the facility — will be used for exports.

Panasonic, which holds 13 per cent of the air conditioner market, has seen a healthy growth in its air-conditioner business riding on back of its Cube ACs, a product specially designed for developing countries like India. These ACs, which were being imported from Malaysia and Thailand, will now be produced in Jhajjar. Sharma expects its market share in air conditioners to grow to 20 per cent by end of 2013.

The company will, however, continue to import some products like the inverter ACs and 17 per cent of the non-inverter ACs for the Indian market.

With the weak festival season for most of the consumer durable companies this year, Panasonic too did not meet its projected revenue targets. The company, which was expecting to do sales of about Rs 1,200 crore, did only Rs 1,000 crore of business this festive season ending on November 15.

“We were expecting a growth of 72 per cent over last year’s festive season but we ended up seeing 56 per cent growth over last year,” says Sharma. “The season was mixed for us, we saw good business from bigger cities and higher end products however distribution in smaller cities was a dampener,” he adds.
Tags assigned to this article:
exclusive to web asia pacific panasonic haryana othertop1 india market washing machines japanese consumer electronics consumer electronics company manish sharma split air conditioners growth markets west asia