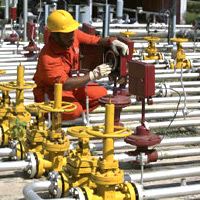 08 November, 2014
Print this article Font size -16+
India has agreed to pay Rs 45,000 crore for the March quarter to state-owned fuel retailers as compensation for selling products at cheaper government-set rates, officials at these companies said on Thursday.

The decision, taken on Wednesday, 22 May 2013, has not yet been formally intimated by the finance ministry, but the current tranche will enable the companies to report quarterly profits at their earnings next week, officials at the three companies, who declined to be named, said.

The three retailers are estimated to have run up total revenue losses of 1.6 trillion rupees in the fiscal year 2012-13.

Of this, the finance ministry will pay about 1 trillion rupees by way of cash subsidies while the balance will be borne by state-run upstream companies - Oil and Natural Gas Corp, Oil India Ltd and GAIL (India) - in the form of discounts on sale of crude oil and associated products.

India has allowed state-run retailers to gradually raise diesel prices since January, in an attempt to prop up public finances, and has also capped annual sales of subsidised cooking gas cylinders.