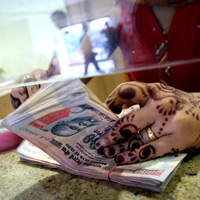 08 November, 2014
Print this article Font size -16+
The prime minister wants measures to avoid volatility in the rupee, finance minister P. Chidambaram told reporters on September 27 after a meeting of the ruling UPA partners.

He did not specify what those measures could be.

"The prime minister underlined the need for a number of measures that will ensure that there is no volatility in the rupee," Chidambaram said.
The rupee gained 49 paise on September 27 to end at over 4-1/2-month high of 53.02 against the US dollar on heavy selling of the American currency by exporters and some banks

Govt To Borrow Rs 2 Lakh Crore, As Expected
India will borrow Rs 2 trillion through bonds in the second half of the current fiscal year, in line with the budget estimate earlier this year, the government said on September 27.

The government vowed to stick to its planned borrowing for the year on September 27, despite higher than expected spending on subsidies and welfare programmes as it seeks to rein in the fiscal deficit and stave off a credit rating downgrade.

Analysts tracking the trajectory of government revenues and spending, however, remain skeptical the government will be able to carry through its commitment, and a Reuters poll this week showed most economists expect an additional borrowing of Rs 50,000 crore for the year.

Arvind Mayaram, economic affairs secretary, said the government will borrow Rs 2 lakh cror selling bonds in the second half of the current fiscal year that begins on October 1.

"The option for fresh borrowing announcement later always exists, but we do not expect that it would be used," Mayaram said.

In March, the government had pencilled in gross market borrowing of Rs 5.7 lakh crore for the 2012-13 fiscal year to help bridge its fiscal deficit that is forecast to be 5.1 percent of the GDP.

But a slowing economy and spending on fuel subsidies and welfare programmes, such as a guaranteed rural employment scheme, launched by the left-leaning Congress government have cast doubt on its ability to meet the full year fiscal gap target.

Already the government's subsidy burden is running higher than it had expected.

But Mayaram played down such concerns.

"We will take more steps towards fiscal consolidation and efforts will be to keep fiscal deficit within budgeted target," he said.

New Delhi is due to sell Rs 15,000 crore of bonds this week, taking its borrowings in the first six months of this fiscal year to Rs 3.7 lakh crore, or 65 per cent of the full-year target.

India's investment grade sovereign credit rating is at risk because of the high fiscal deficit, whose funding through market borrowing is crowding out private investors and lowering growth prospects.

"This is as clear as it can get. It is a serious fiscal consolidation step. One large uncertainty is clearly behind us," said Sandeep Bagla, executive vice president at ICICI Securities Primary Dealership referring to the government's plan not to overshoot the borrowing target.

The benchmark 10-year bond yield closed down 1 basis point at 8.16 per cent before the announcement.

"There should be a small rally (in bonds) tomorrow. Besides, this move also would fuel expectations for a rate cut. The government is moving towards fiscal consolidation, so the ball is now set for a rate cut in October," said Kushal Maheshwari, a fund manager with Bajaj Corp.

To ease the pressure on the fiscal deficit, the government is looking at shoring up revenues through more efficient tax collections, an auction of cancelled second-generation mobile phone licences and sales of stakes in state-run firms. But that may not be enough.