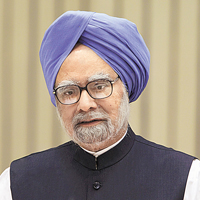 08 November, 2014
Print this article Font size -16+
Does the international media have an agenda to run down Indian Prime Minister Manmohan Singh? If the Prime Minister’s Office (PMO) and the functionaries of the United Progressive Alliance (UPA) think so, they can’t be blamed. After Time magazine put the Indian premier on the cover in July with the unenviable tag of ‘Underachiever’, and The Independent wondered if he’s “Sonia Gandhi’s poodle”, it is now the turn of The Washington Post to call him a “tragic failure”. While the PMO and information and broadcasting minister Ambika Soni termed the article unprofessional and accused the paper of practising yellow journalism, the author, WaPo’s India bureau chief Simon Denyer, said his requests for an interview with the prime minister for his version was denied.
Golden Days
It looks like the yellow metal is gearing up for a long haul. As on 5 September, gold touched an all-time high of Rs 31,980 per 10 grams. While individual buyers are shying away from the markets, jewellers are stocking up the precious metal to meet the demand in the upcoming marriage season. Gold futures are also up; they stood at Rs 32,758 per 10 grams on 6 September and are headed up, it seems.
Moving On
Kaushik Basu, India’s straight-talking former chief economic adviser, is joining the World Bank as its chief economist. During his two-and-a-half-year stint in the finance ministry, he drew a lot of attention for his candid, sometimes controversial, views. Basu, whose CV runs into 25 pages, has authored 15 books and 160 papers on economics.
Expanding Horizons
India’s largest refiner, Indian Oil Corporation, is on an expansion drive. It plans to invest Rs 50,000 crore on expanding its existing refineries and setting up a new one on the west coast. With the investment, the company’s refining capacity will rise 60 per cent from 65.7 million tonnes per annum (mtpa) to 105 mtpa by 2022.
Powering Tajikistan
State-owned Bhel has signed a preliminary agreement with Tajikistan to set up a 100 MW hydro-electric power project. Bhel will set up the plant on the Zeravshan river, and will help in harnessing Tajikistan’s hydro potential, the company said in a release.
Smart(ing) Decision
Twitter is turning smart, but its decision could leave app makers smarting. The micro-blogging site has decided to shut out third-party apps that run on
Twitter but don’t make any money for it.
A Healthy Deal
India’s telecom major Bharti Airtel is foraying into insurance and health-funding products in faraway Africa. It has entered into an agreement with South African financial services group Sanlam for this purpose. This agreement covers seven African countries —Kenya, Ghana, Tanzania, Zambia, Uganda, Malawi and Nigeria.
Back On Track
Production at Maruti Suzuki India, which suffered a heavy blow due to workers’ violence at its Manesar plant, is finally coming back on track. The car maker expects to have full employee strength at its Manesar plant by end-September with the completion of fresh recruitments. Maruti had about 3,300 workers at the Manesar plant before the 18 July violence, in which one executive was killed and 100 injured. The plant has an annual production capacity of 550,000 units.
Veggie Delight
Beefy McDonald’s is taking to the leaf. The American food chain will soon open pure vegetarian outlets at the foothills of the Vaishno Devi shrine at Katra in Jammu & Kashmir and near the Golden Temple in Amritsar. More than one million pilgrims visit these shrines each year.
Acquisition Strategy
Tech Mahindra has announced the acquisition of Hutchison Global Services for an upfront payment of $87.1 million (Rs 485 crore). The acquisition will lead to significant enhancement of Tech Mahindra’s expertise in the customer management space and will be a key component of its strategic plans going forward, the firm said in a statement.