PM, Putin Praise Each Other For Bolstering Bilateral Ties 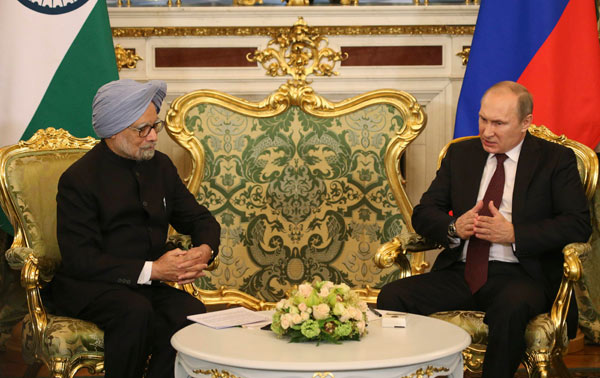 08 November, 2014
Print this article Font size -16+
Prime Minister Manmohan Singh and Russian President Vladimir Putin on Monday, 21 October, showered accolades on each other for pushing the bilateral relationship as they held talks on ways to bolster the strategic ties further.
"India is our strategic partner. Most of our mutual achievements have been achieved under your leadership and I am grateful to you," Putin said in his opening remarks at his meeting with Singh.
He noted that the two countries have cooperation in different areas, including military and technological areas and are diversifying the economic relationship.
"Even at present we are having joint counter terrorism exercises going on in India," the Russian President said.
The two countries also have cooperation in political areas and are working together in the UN and BRICS, he pointed out.
In his opening remarks, Singh credited Putin with being instrumental in promoting and strengthening the bilateral partnership. "We are grateful to you for your sustained personal interest and commitment."
He told Putin that India's relationship with the Russian Federation occupies a very privileged place in its foreign policy.
"We cherish our true and time-tested friendship with Russia, which has remained strong and relevant despite changes in the world at large," Singh said.
"The level of trust and confidence that we have in our relations with Russia is unmatched by any of our other relationship.
I would like to reaffirm that our relations with Russia remain a strategic priority for us and will continue to grow, not only bilaterally but also on the global and regional issues," he said.
Singh expressed happiness over the fact that good progress is taking place in bilateral cooperation in the fields of defence, energy, science and high technology as well as in tourism, trade and investment.
He observed that coordination between India and Russia in multilateral fora, such as BRICS (comprising of Brazil, Russia, India, China and South Africa), G-20 and the East Asia Summit, has also deepened.
"Ours is truly a special and privileged strategic partnership to which Mr President you have contributed a lot during past years," Singh said.
The Prime Minister also lauded Putin's role in seeking a political settlement in Syria and welcomed the framework agreement worked out by Russia and the US for a time-bound elimination of chemical weapons in Syria.