Mumbai (Maharashtra) [India], October 10 (ANI): Vivek Oberoi-starrer PM Narendra Modi, a biopic on the prime minister, will be the "first film" to hit the theatres on October 15, once the COVID-19-induced restrictions on cinema halls and multiplexes are lifted.
Film critic and movie trade analyst Taran Adarsh confirmed the news of its re-release in theatres, on Saturday on social media. 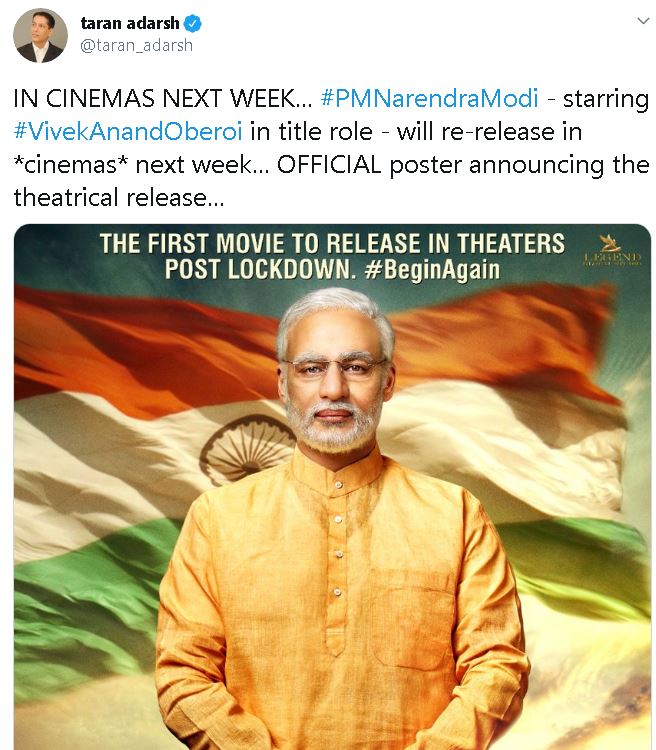 "IN CINEMAS NEXT WEEK... #PMNarendraModi - starring #VivekAnandOberoi in title role - will re-release in *cinemas* next week... OFFICIAL poster announcing the theatrical release...," he tweeted.
Taran also shared a poster of the film featuring Oberoi, bearing an uncanny resemblance to PM Modi.
The poster read, "The first movie to release in theatres post lockdown, #BeginAgain."
In the movie, which was first released on May 24 last year, Oberoi plays the titular role of PM Modi, essaying as many as nine different looks. This is a first for the Saathiya actor who has played a real-life character.
The movie also stars Boman Irani, Manoj Joshi, Prashant Narayanan, Barkha Bisht, Rajendra Gupta and Zarina Wahab.
Produced by Sandip Singh, Anand Pandit and Suresh Oberoi, the biopic showcases PM Modi's political journey. (ANI)