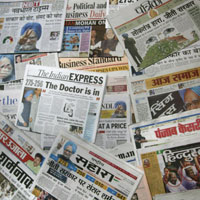 08 November, 2014
Print this article Font size -16+
The Press Council of India (PCI), which had been asked by the I&B Ministry to look into the issue of increasing FDI caps in print media, has opined that there is no need to raise the foreign investment limits.

Sources told PTI that a sub-committee appointed by the Council to look into the issue, after seeking opinion from various members and deliberations, came to the conclusion that there is no need for a hike in FDI limits.

"The Press Council has written to the I&B Ministry about the views formulated by a sub committee appointed by it. The PCI has told the ministry that there was no pressing need that required increasing FDI limits when the Home ministry has opposed such a move," a source said.

The I&B ministry had earlier sought the views of the PCI on a proposal moved by the Commerce Ministry to increase the FDI in print media.

Currently, the sectoral cap for FDI in print media is 26 per cent though a Commerce Ministry has proposed to raise it to 49 per cent through the automatic route.

The home ministry had also strongly opposed any move to increase the FDI cap in the broadcasting and print media, saying allowing more foreign investment in the sensitive sectors may compromise country's security.

The Indian Newspaper Society (INS) had, however, favoured enhancing the FDI ceiling in print media to 49 per cent as it said media companies needed inflow of funds to expand as there are significant prospects for more growth.