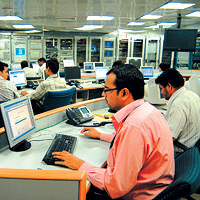 As global recession shows signs of easing, the information technology (IT) industry is experiencing a few positive developments after nearly 18 months of gloom. Since last quarter, India's biggest IT firms Tata Consultancy Services (TCS), Wipro and HCL have closed a few large deals, hinting at greater traction in outsourcing in the IT industry.

Wipro's Rs 2,500-crore deal with Unitech has indicated a new beginning. In the first quarter of FY2009-10, Wipro signed 26 deals worth $700 million. Recently, Wipro bagged an IT contract from US-based Aquarion Water Company.

On the other hand, TCS bagged a multi-million dollar deal for cost and application management from BP in August. Following that, it signed a Rs 140-crore deal with the government of Andhra Pradesh and deals worth $25 million (Rs 120 crore) with a few international banks.

According to Nasscom — the apex body of the IT and BPO (business process outsourcing) companies in India — the industry will likely grow 4-7 per cent by the end of FY2009. "It was expected that by the third quarter of 2009 the deals would start flowing in, but revenues would improve in the fourth quarter," says Som Mittal, president of Nasscom. According to him, the industry's revival is based on the new deals and on the diversification of the IT-BPO companies in various verticals, geographies and customer base.

While announcing HCL's annual results recently, Vineet Nayar, CEO of HCL Technologies, had tempered the excitement saying that the coming few months are going to be soft and not many deals should be expected. However, even HCL has bagged an estimated $33-million (Rs 159 crore) deal from Oncor — a US-based electric distribution and transmission company. "There are customers looking at IT spending for cost optimisation and to get more value on the spending," says Suresh Sundaram, global head for marketing and strategy at HCL Technologies. Return on investment is a major issue for customers today, so many are re-looking at existing contracts.

The slowdown forced the IT companies to look at different verticals, apart from BFSI (banking, financial services and insurance) and telecom, which were dominant earlier. Other sectors such as healthcare and media are also potential customers for big companies today. HCL sees distributed revenue coming from all segments, including media and life sciences.

Even though outsourcing is picking up, most of the spends by firms is largely on consolidation and cost cutting. The discretionary spending is still to pick up. "Most of the IT companies today are benefiting from vendor consolidation," says Nasscom's Mittal. This has led to opening up of new markets such as Latin America, Western Europe and Asia-Pacific, he adds.

The slowdown has definitely changed a lot of rules of the IT industry as new verticals and geographies pop up. What is important is whether they will be able to sustain the volumes, which have hit a trough in the past one-and-a-half years.