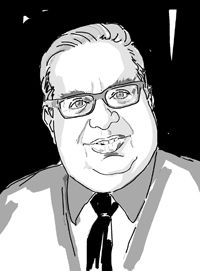 As we all know, most investors have been sitting on a lot of cash for some time now. And, again, despite the so called "policy paralysis" and the rona dhona of many of our captains of business and industry, the India investment story is very much alive; it is quite well and  actually kicking — during April-October 2011, foreign direct investment was up 50 per cent relative to the previous year.

I see continued volatility in the rupee, certainly in the early part of next year, which is not a bad thing, always. Perhaps, the main reason we have got into this near-crisis situation is because rupee volatility was much too low for most of 2011. With the rupee steady around 45 from the start of the year till about August, forward premia as high as 6 per cent, and, it must be said the inertia-fed view that the rupee can only strengthen, few people with short dollar positions (importers and companies with ECB's) could be convinced to buy dollars. I know. I tried.

And, of course, when the wheel turned, with the dollar shooting up in September, there was plenty of blood on the streets and balance sheets. If rupee volatility had been higher, it is likely that more companies would have hedged themselves, at least, partially.

Coming back to the market, another twist in the tale is, of course, the Euro. Will it or won't it   hold together? To my mind, it will. There is too much invested in its sustenance and the cost and process of unwinding will, perhaps, be too much for the European economy to take. The side effect of keeping it together will, bring a dramatic change in European governance, with profligate democracy giving way to a more Germanic control. Indeed, it is ironic that as West Asia is discovering and demanding more self-determination, countries that have been democratic for decades, including India and the US, are finding themselves pushed against the limits of democracy.

When the market fully accepts that the Euro will hang together, despite the ongoing wobbles in the sovereign debt market, it could trigger a relief rally, further adding to global volatility. But once the realisation becomes widespread, it should give way to the underlying dollar strength since the only way that Greece and other weak European economies can survive is if the currency remains much weaker.