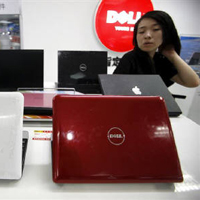 08 November, 2014
Print this article Font size -16+
Three of Dell Inc's largest investors joined Southeastern Asset Management on Friday, 8 February, 2013, in objecting to a $24.4 billion buyout of the No. 3 PC maker led by Chief Executive Michael Dell, sources said, as opposition grows to the largest buyout since the start of the financial crisis.

The sources told Reuters that Harris Associates LP, Yacktman Asset Management and Pzena Investment Management LLC - which together hold 3.3 per cent of Dell's outstanding stock according to Thomson Reuters data - now plan to vote against a buyout that would end Dell's turbulent 24-year ride on public markets.

That means that four of Dell's 20 largest shareholders harbor misgivings about a deal to take private a company struggling to grow revenue as the global PC industry heads into decline. Dell Inc is now trying to transform itself into a provider of enterprise services in the mold of IBM.

Harris and Yacktman did not respond to requests for comment.

With the latest additions to the chorus, shareholders representing almost 14 per cent of Dell shares not held by Michael Dell have now said they will vote against the deal. Billionaire Dell, who created the computer maker out of his college dorm room in 1984, holds a roughly 16 percent stake.

Dell shares rose on Friday after Southeastern's announcement, briefly trading above the $13.65 offer price before settling slightly to close up 0.7 percent at $13.63.

"We are writing to express our extreme disappointment regarding the proposed go-private transaction, which we believe grossly undervalues the Company," Southeastern CEO Mason Hawkins and Chief Investment Officer Staley Cates wrote in a letter.

"We retain and intend to avail ourselves of all options at our disposal to oppose the proposed transaction, including but not limited to a proxy fight, litigation claims and any available Delaware statutory appraisal rights."

The growing opposition sets up a potential battle with the founder and private equity firm Silver Lake, who are pushing a deal to take the company private. Silver Lake declined to comment for this story.

Southeastern, run by activist investor Hawkins and owner of 8.5 percent of Dell, including options, argues that the company is worth $24 a share if its financial services division, recent acquisitions and other assets were factored in.

Richard Pzena, Chairman of Pzena Investment Management, has also spoken out against the deal. On Friday, he advocated a Dutch auction, which would involve a public tender of shares, and argued that Dell should be worth more than $20 a share.

"The one thing that was missing from Southeastern's letter was an objection that as a private company they can achieve their objectives that they can't as a public company," Pzena told Reuters in an interview.

"You are hard pressed to see what that is especially since ... they said they are not changing their strategy," said Pzena.

In response, Dell repeated its stance that "The Board concluded that the proposed all-cash transaction is in the best interests of stockholders."

A Battle Looms
Michael Dell struck a deal early this week to take Dell private, partnering with Silver Lake and Microsoft Corp <MSFT.O>. The aim is to facilitate Dell's difficult transition from a commodity maker of computers into a provider of services to enterprises as a private company, away from Wall Street's scrutiny.

Several other sources close to the Michael Dell-Silver Lake consortium told Reuters on Friday that the buyers did not intend to raise their $13.65 offer price in spite of Southeastern's objections.

Shares in Dell have galloped 25 percent higher since news of the buyout emerged in early January.

The consortium is now holding to the belief that information contained in an upcoming proxy statement, when published, will reveal how Dell's independent committee negotiated thoroughly and explored all options, the people said.

But under the buyout's terms, a majority of shares not held by Michael Dell must be voted in favor of the deal for it to proceed.

Memphis, Tennessee-based Southeastern believes the Dell board had several alternatives that would have produced a far better outcome for public shareholders, including breaking up the company and selling the units separately.

Sanford Bernstein analyst Toni Sacconaghi estimates Hawkins' asset management house paid an average of more $20 a share for its stake, meaning a loss of at least $825 million at the current $13.65 offer price.

Wall Street periodically speculates about a break-up of PC makers such as Hewlett Packard <HPQ.N> or Dell, both of whom have major PC-making operations but in recent years have grown their much larger IT divisions - providing software, services and networking among other things to corporations.

Dell was regarded as a model of innovation as recently as the early 2000s, pioneering online ordering of custom PCs and working closely with Asian suppliers and manufacturers to assure rock-bottom production costs. But it missed the big industry shift to tablet computers, smartphones and high-powered consumer electronics such as music players and gaming consoles.

Southeastern, the most prominent of a clutch of investors including Alpine Capital Research and Schneider Capital funds that have voiced opposition to the buyout, on Friday argued that the company had the capability to pay a $12 special dividend to shareholders, realizing much more value while still retaining significant cash-flow.

Dell has now gone into a go-shop process, during which it can solicit better offers. But Hawkins and Cates argue that Michael Dell's involvement may affect that procedure.

"We are concerned that given the participation of Michael Dell in this transaction, that a traditional go shop process is not sufficient to ensure that the Company receives superior offers," they wrote.

Morningstar analyst Carr Lanphie said it is not a surprise that some investors do not like the offer price, but said the stock would fall sharply if the deal does not go through.

"The point being that if this doesn't go through, you are going to swallow a 35-40 percent decline in share price," Lanphie said. "Then, your chairman just had his attempted buyout rejected.

"Given the management they have lost in the last couple of months, will they be able to continue to grow the company? That is something the investors will need to consider," he added.