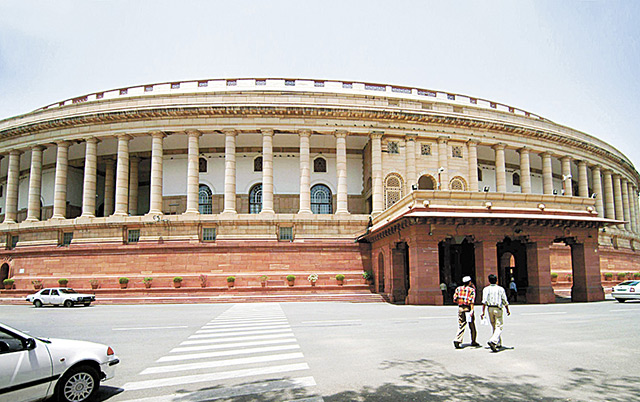 27 April, 2015
Print this article Font size -16+
Opposition members on Thursday (23 April) created ruckus in the Lok Sabha over the suicide of a farmer here yesterday, leading to adjournment of proceedings even as the government said it was ready to discuss the matter.

Raising the issue soon after the House assembled for the day, Congress members, who along with those of other parties, demanded suspension of the Question Hour, which Speaker Sumitra Mahajan rejected saying the matter could be discussed later in the day.

But the opposition members continued to protest seeking an immediate debate on the issue.

As the protests continued, Mahajan asked the agitating members not to "politicise the matter".

"No one is bothered about the problems of farmers...

Everyone is playing their own politics," she said and added that she herself was saddened by the incident. Amid the din, Parliamentary Affairs Minister M Venkaiah Naidu said the government was ready to discuss the farmer's suicide, which is a "important, serious and urgent".

Making a case for adjourning the proceedings, Congress leader Mallikarjun Kharge asked what else can be a more important matter for which the Question Hour can be adjourned than a farmer committing suicide in broad day light.

"Government does not want to take notice (about the incident)," he said, as Mahajan sharply reacted asking him not to make any allegations as it was a "sensitive issue".

Referring to yesterday's incident, Kharge also said that the police as well as those sitting on the dais at the rally were witnessing it. "Whether one is on this side (Opposition) or on the other side (ruling), all are sad about the incident...," Kharge said.

As Congress members trooped into the well shouting slogans like 'Kisan virodhi sarkar nahi chalegi (down with anti-farmer government'), they were joined by those from JD(U) and SP.

The Speaker pleaded with the protesting members saying that all parties would be given an opportunity to speak on the matter, but to no avail. Congress members K C Venugopal, Rajeev Satav, Deepender Singh Hooda and Ravneet Singh Bittu (all Congress), Saugata Roy (Trinamool Congress), M B Rajesh and P Karunakaran (both CPI-M) others had given notices to adjourn the Question Hour.