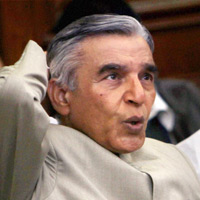 08 November, 2014
Print this article Font size -16+
Railway Minister Pawan Kumar Bansal and Law Minister Ashwani Kumar were forced to resign on Friday, 10 May night by the Congress and the Prime Minister as the government's image continued to take a severe battering over allegations of corruption and interference with graft probe.

On a day of dramatic developments, Congress President Sonia Gandhi met Prime Minister Manmohan Singh and it was decided that both should be asked to put in their papers to contain any further damage to the government that has already been plagued by a series of scandals.

"Yes, I have resigned," said 64-year-old Bansal emerging from a meeting with the Prime Minister, a week after his nephew was arrested for allegedly accepting Rs 90 lakh from a Railway Board member for a promise of promotion.

Soon after Bansal, Law Minister Ashwani Kumar, who is under attack over vetting of CBI report in the probe into coal block allocation scam, also met the Prime Minister and submitted his resignation.

PMO spokesman said their resignations are being forwarded to President Pranab Mukherjee.

In his resignation letter, Bansal maintained that he was not aware that his nephew Vijay Singla was in contact with Railway Board Member Mahesh Kumar but he still thought it proper to step down.

He said he looks forward to an expeditious investigation into the allegations.

Ashwani Kumar, in his resignation letter, said he was resigning to put an end to "unnecessary controversy" and "public perception of any wrongdoing".

He maintained that the Supreme Court had not passed any strictures against him.   The government is expected to come out with a detailed statement on the issueon 11 May.

Already battered by a series of scams, the party and the government suffered a severe blow when Bansal's nephew Vijay Singla was arrested last Friday for allegedly accepting Rs 90 lakh as bribe for helping in the promotion of a Railway Board Member Mahesh Kumar.  Media reports that a number of kin of Bansal had benefited from a public sector bank by way of loans when he was Minister of State of Finance earlier further embarrassed the party and the government.

Law Minister Ashwani Kumar, a Rajya Sabha MP and also considered close to Prime Minister Manmohan Singh, had been under fire for longer than Bansal. Kumar's position became weaker when CBI Director Ranjit Sinha told the Supreme Court the agency's status report on the coal allocation scam was "shared" Ashwani Kumar "as desired by him".

The apex court had made a reference to the Law Minister's role in vetting the probe report and asked, "does it not subvert the integrity of the investigation if changes are brought in status report on the suggestion of Law Minister and government officers."

Hint Of Final Outcome
A clear hint about action against Bansal came when Congress spokesman Bhakt Charan Das said the party will not spare anybody "mired" in corruption or manipulation.

Opposition demands for Bansal and another minister to resign had paralysed parliament and forced the government this week to cut short its budget session by two days. The uproar dashed the government's hopes, for now, of passing more economic reforms and a vote-winning plan to give cheap food to 70 per cent of the population.

Significantly, Bansal skipped a meeting of the Union Cabinet on 9 May evening, that added grist to the mill that he could be on his way out.

Bansal's woes mounted when the CBI questioned his Private Secretary Rahul Bhandari, a 1997-batch IAS officer from Punjab cadre, in connection with the alleged Rs 10 crore bribery scandal. Bansal has denied any wrongdoing by him claiming that he has no business links with Singla.

Bansal was trying to drum up support for himself with four railway unions described him as an efficient administrator who is trying to put railways back on track financially.

A Reshuffle On The Way

The exit of two ministers is expected to trigger a reshuffle in the Council of Ministers over which the Congress President and the Prime Minister will meet on Sunday, 12 May.

Meanwhile, there were unconfirmed reports from Bangalore that Union Labour Minister Mallikarjun Kharge, who lost out in race for Chief Ministership in Karnataka, told his supporters not to be disheartened because he may be given the Railway portfolio.

Initially the Congress party decided to weather the storm over Bansal but as more and more damning reports surfaced, it had to take a call on asking him to quit.
Congress top brass is scheduled to meet on 11 May evening and Law Minister Ashwini Kumar may be shifted to a different portfolio in the possible reshuffle of the Union Cabinet.

Kumar is under attack for vetting CBI report on coal block allocation scam, with the Supreme Court making critical observations over it.

The apex court had made a reference to the Law Minister's role in vetting the probe report and asked, "does it not subvert the integrity of the investigation if changes are brought in status report on the suggestion of Law Minister and government officers."