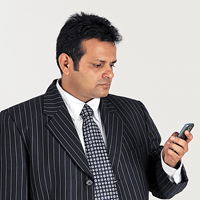 Sibal's men have their roles clearly defined. Malay Srivastava, with experience in special licence and policy issues in the power sector, briefs Sibal and R. Chandrashekhar, secretary, DoT. Srivastava also vets the briefs prepared by other officials. One of the first things Srivastava did was to ask for all the 1999 files of migration from licence fee to revenue-sharing regime for mobile operators.

While Srivastava is aided by Mittal, Khanna has been given the responsibility of organising meetings with telecom industry leaders and ensuring the units within DoT meet the deadline of submitting 2G-related reports. Khanna is also scrutinising the correspondence since 1999, from the communications minister's office with the Wireless Planning Commission.

Chahar is considered as a key person in policy issues in the law ministry. "He is the best in his peer group in dissecting policy related matters," says an official in the Ministry of Personnel, Public Grievances and Pensions. To ensure that all the findings by DoT on policy decisions between 2001 till 2009 are corroborated by an independent body, Sibal has appointed retired Supreme Court Justice Shivraj Vir Patil. He is expected to submit his report this month. But DoT sources say that he may get more time.
break-page-break
Chasing Money
The second part of Sibal's mandate — getting money from operators — is the difficult task. However, Sibal has already started wielding the stick on revenue loss due to delayed roll-out of mobile telecom services. On New Year's Day, he announced that against a demand of Rs 78 crore generated by the department, Rs 79 crore was recovered from Etisalat DB, Loop Telecom, Uninor, Sistema-Shyam and Aircel.

"This is based on delays of even 15 days," says a senior DoT official. Amongst the major defaulters are Sistema Shyam (Rs 11 crore), Etisalat DB (Rs 9.9 crore), and HFCL (Rs 7 crore). Uninor, which faces a penalty of Rs 7 crore, has paid Rs 3 crore, sources said.

Sibal is looking at getting dues from incumbent operators, too. DoT estimates that operators such as Bharti Airtel, Tata Teleservices and Reliance Communications face a penalty of Rs 28.85 crore. However, none of them has paid up yet. A bigger hit is expected to come on those operators who had secured spectrum in excess of 6.2 MHz. A senior DoT official says: "We are examining it and will notify the operators soon." Bharti, Vodafone, BSNL, MTNL and Idea have more than the contracted 6.2 MHz of spectrum in many circles.

As per the Comptroller and Auditor General (CAG) report, the presumptive loss is based on four parameters: one, the rate that Swan got for selling its equity (Rs 12,003 crore); two, Unitech's sale of equity (Rs 14,052 crore); three, S-Tel's offer to pay for the spectrum (Rs 13,841 crore); and finally, the basis amount generated for 3G spectrum (Rs 36,993 crore).

Another issue being examined is the loss to the exchequer due to the migration of operators from basic service licence to mobile licence. These were converted into the universal access service licence in 2001. DoT estimates this to be in the range of Rs 13,000 crore for two operators alone (Tata Teleservices and Reliance). The total migration package for all operators is estimated to be Rs 59,000 crore.

New Policy
Sibal recently announced a 100-day plan to formulate a new telecom policy in 2011. He is expected to create a cell of senior DoT officials to work on this. While it is too early to speculate on the policy, it is expected to provide 100 per cent teledensity in both urban and rural India. It will also provide guidelines for the renewal of telecom licences. That is important as the first batch of licences issued in the mid-1990s is up for renewal over the next five years. The government is expected to encourage M&As in the sector as long as there are at least six operators in each telecom circle. Another area that would be of interest to operators is rationalisation of taxes. Right now, operators pay 30-35 per cent of their adjusted gross revenue to the government in some form or the other.

In the last week of December, Sibal met Sunil Mittal, Anil Ambani and Ratan Tata — separately — even though he wanted to meet them together. According to industry sources, he told them that there is enough evidence that each telecom company has benefited from policies at different stages and that can be presented to the courts. The legal team in DoT has prepared a docket establishing how spectrum was allocated to different operators during 2001-2009. It contains correspondence between the legal and technical teams, the Telecom Commission and the Communications Ministers.

How Sibal and his men manage the damage of the 2G scam will decide the government stance in the Budget session of Parliament. And to some extent the fate of the Congress party in the coming state elections.