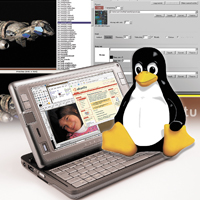 Last week, Lenovo announced the launch of the world's first smartbook, a device with capabilities and size in between a smartphone and a netbook (see ‘Street Smart', BW, 23 October 2009). The announcement is important for two reasons. The obvious one: it is the first smartbook to be launched. But the more interesting reason is it runs open source operating system Ubuntu Linux on a Snapdragon processor from Qualcomm, but is being sold by a mainstream PC vendor. It is not often a mainstream computer maker picks a non-Intel, non-Microsoft combination, even allowing for the new category. Could we see a new opportunity for open source software?

Yes, probably; though for now it is just enough to keep Microsoft on its toes. Lenovo is not the only large company to announce open source products. This week, Dell announced a new computer, Inspiron Zino HD mini desktop, that runs Ubuntu. This is as good a deal as you can get on a desktop, if you are not desperate to use Windows. Zino is an 8-inch square, costs $230 (about Rs 11,000) in the US, and has AMD dual core processors, discrete graphics, HDMI (high-definition multimedia interface) and other ports. It is also available in 10 colours.

Just to mention another notable Linux launch, IBM and Canonical (which develops Ubuntu) together recently launched a cloud- and Linux-based desktop package. Ubuntu, launched in 2004, has improved significantly in recent times, with a compelling graphical user interface and multimedia capabilities. It also comes with many applications such as the Firefox browser, email and news client Thunderbird and OpenOffice. Their stability would be appealing to any user, but for the average consumer, Linux versions are still not a popular buy. They do not include some key applications including important browser plug-ins. Further, some popular video streaming sites such as Netflix use proprietary software that does not run on Linux. So, if you buy a Linux PC at home, you will encounter these problems at some stage. It is not without reason Linux OS has only 1 per cent market share in desktops.

Yet, these recent launches keep Linux going. Windows 7 on many netbooks is the stripped down starter edition, whose limitations netbook buyers are likely to discover some time after buying the product. This is why Linux is not dead yet. ABI Research recently predicted that one-third of all netbooks sold globally this year would be Linux-based. However, the real alternative to Windows would be Google's Chrome OS, whose source code was opened to developers on November 19.

Chrome is an internet-based operating system. It would work on both Intel and ARM processors, which is always an advantage. Google is already creating an impact with its Android operating system (after a few initial hiccups) for mobile phones, and it would be natural to extend this influence to netbooks.

But the real advantage of Chrome would be the influence of Google in the IT world. It is not difficult for Google to get the big players on board. In fact, it is already working with Intel, ARM, Adobe, major PC-makers and so on. The Chrome is, of course, designed to work with Google applications, persuading people to use more of its services. It remains to be seen how Chrome will influence the other Linux distributions. Its launch next year is definitely one of the events to watch in the PC world.