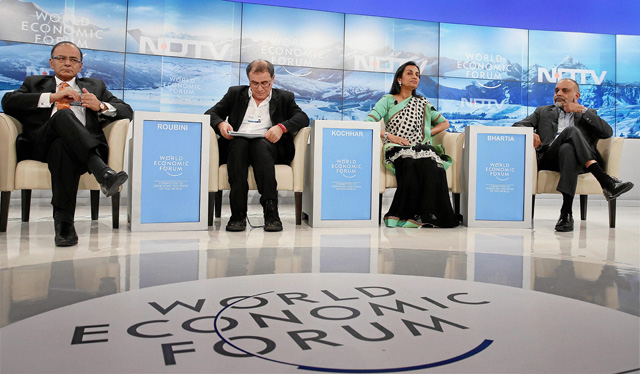 05 February, 2015
Print this article Font size -16+
As expectations continue to build up on the first full budget of the Modi government, Finance Minister Arun Jaitley said the sum-total of the reform measures and other policy initiatives already taken would be much more than "the big bang".

"I am not going to be swayed by these phrases that are used in television studios. If you take the sum total of all the steps we have already taken, it will be much more than the big bang. Even big bang looks small in comparison," Jaitley said here on the sidelines of WEF Annual Meeting.

He was replying to a question on whether the global investors present here at Davos were also expecting a 'big bang' budget from him next month.

Jaitley also hinted at not raising tax rates and providing incentives for manufacturing in the coming Budget while asserting that "structural changes" will have to be made to get the economy to 8-9 per cent growth.
Read Also: Govt Readies PFC, Other Firms For Sell-Off Before March

Hard selling India to global investors at the World Economic Forum here, he also promised a stable tax regime that will not come up with unreasonable demand and change taxes retrospectively.

"In terms of incentivising manufacturing, it is very much on our agenda. Even though we had few days during the last Budget we did give to Ministry of Micro Small and Medium Enterprises (MSME), National Investment and Manufacturing zone(NIMZ) and so on because we wanted the sector to pick up and that priority is fairly high on our agenda," he said speaking at a session on 'India's Next Decade'.

While referring to various revenue sources for the government including divestment, dividend and spectrum sale, the Finance Minister said as economic activity picks up, the government's capacity to raise revenue will also increase.

"I am not in favour of raising the rates of taxation as that could become counter-productive," he told reporters late Thursday (22 January) night.

Speaking at Friday's (23 January) session, Jaitley said there was need to take a series of reforms as the last 10 years got lost out because of unnecessary debates.

"Now that opportunity has come back to us. Slowly we (BJP) are moving in the direction of having a good figure in the Upper House (Rajya Sabha). The pro-reforms (groups) have won everywhere," he said.

The slumping oil prices was another factor that was going in India's favour. Also many economies in the world, which were competing with India, were not doing well.

"It is really possible for us to go back to the original capacity of high growth rate. As far as taxation is concerned, the global community and Indian tax payers want to be convinced that there will be a stable tax regime.

"I cannot come up with unreasonable demand and change taxes retrospectively. Such tax demands as such do not earn us any revenue and give us only bad name," he said. "The message I am giving is that we will have a stable tax regime."

To a question on whether it will be a 'Big Bang' Budget next month, he said he would not be swayed by such phrases used in television studios. If the sum total of all the steps the government has taken is taken into account, it would be much more than the big bang.

"The Budget will be a very important occasion for the government but then the next 364 days are equally important.

"In the mining sector, in allocation of natural resources, what we have done, is it not big bang? After all these are the steps that we take in management of the economy of the country. These are steps which our predecessors had failed to take.

"The budget will be a very important occasion for this government, but then the next 364 days are equally important."

"I'll again say that I'm not tempering down the expectations. If you look at what happened in the last budget that we presented, we announced a particular direction in the Budget and that was followed up with a lot of activity and action over the next six months," he said.

On the road ahead of raising tax revenues from oil when prices were falling, Jaitley said, "As far as petrol and oil prices are concerned, the prices are coming down. I can't say what will happen in future, but then there is of course a lot of benefit that we have passed on to the people.

"Some benefits, the oil companies have subsumed themselves but not for profit but because they had also suffered serious losses on account of.... They cannot suffer the losses and pass on the benefits", Jaitley said.

"They buy at a particular price and by the time they sell, the price might have gone down and they lose in the process."

Jaitley said that the government inherited a manufacturing sector that was either flat or in bad shape and the economy was not in the best of its time.

Asked about the quantum of such tax revenues, he said this began towards the end of the year in December and in just about four months "this cannot be phenomenally high, but still it will give us some breathing space".

On the longer term tax policy of the government and possible tax benefits for businesses, Jaitley said, "If manufacturing growth goes up, if GDP moves up to 8-9 per cent, there will be far more flexibility.

"But if my revenue position remains tight then I cannot borrow to give benefits. At the same time, I have repeatedly said we are not a high tax government. That's not our belief, we want to increase volumes, we want to expand economic activities. I cannot share more before budget."

On infrastructure spending, he said, "We will have to have some public spending because the public-private model, at least in the transient phase, has setbacks. There are highways, railways ports, we want to start activity on each of these.

"There will be public spending and there will be private spending that will be encouraged. Of course, the infrastructure financing from international sources is also important, because that is the investment where capital is available at much cheaper rates and we will encourage people to do that. That is what we are doing here at Davos too."

Jaitley had said yesterday that his target was to bring down fiscal deficit to below 3 per cent over next few years.

"As the economic activity picks up, the government's capacity to raise revenue will also increase. I am not in favour of raising the rates of taxation, as that could become counter productive," he added.

Privatisation On Track
On privatisation, he said, "Those would be the companies that are not doing well and therefore today the government can not keep taxing people in order to fund losses year after year.

"There are a large number of companies and I think at an appropriate stage, when the concerned ministries speak to us on how those companies can be revived, certainly this is one possible roadmap."

Asked about the possible names, the Minister said, "I cannot get into speculations, because no names have been worked out."

"If you look at income tax or direct tax growth, that has been significant even though we are not passing through a fast-growth economic phase. Despite a growth rate of 5.5 per cent, the direct taxes have substantially increased.

"It is the refunds that have created a problem for us as I also have to pay for the past liabilities. Similarly, in indirect taxes, some areas have done quite well. Manufacturing has been a challenging area, but we see an upward move at least in the later part of the year."

India is likely to sell a 5 per cent stake in both Power Finance Corporation Ltd (PFC) and Dredging Corporation of India Ltd as it races to narrow its fiscal gap to a targetted seven-year low by March, when the financial year ends.
Tags assigned to this article:
economy top 1 tax world economic forum davos arun jaitley big bang reforms make in india