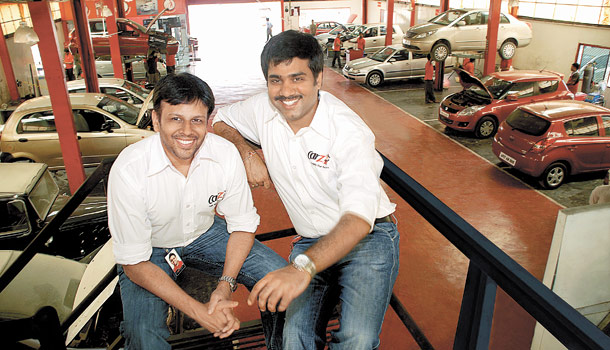 08 November, 2014
Print this article Font size -16+
In the mid 1990s, while they were still in college, Vijay Gummadi and Venu Donepudi wrote to a leading Japanese firm seeking partnership. The friends did so just for kicks. But the firm replied, saying it was ready to let them make its electronic boards in India. Of course, they could not take up the offer. But years on, they got together once again to try out — this time with all seriousness — a ground-breaking idea. In 2008, they set up Vahan Motors and challenged the routine car-servicing model with their CarZ brand of services.

CarZ focuses only on the service side of the business, unlike its popular peer Carnation, started in 2009 by former Maruti Suzuki managing director Jagdish Khattar. It neither sells accessories, nor does it sell or buy used cars. But its service bouquet is pretty varied; it includes filling air, changing oil filters and brake pads, engine overhaul, dent removal and painting. And the model has worked. In the past three years, the firm’s turnover has gone up from just Rs 1 crore to Rs 20 crore. Today, it has 18 service centres in south India and plans to open 240 more across India in four years. In comparison, Carnation has around 25 centres.
Gummadi and Donepudi set up Vahan after spending a decade in the US. Donepudi worked with auto majors Chrysler, Ford and GM in various capacities, while Gummadi founded two technology start-ups in the US. The two would often talk about how India was becoming one of the largest car markets in the world and how one could tap it. In 2006, they identified a few pointers: car owners did not know whether they were paying the right cost; there weren’t many organised car service centres in India; and an explosion in car-buying was imminent.

Obviously, friends and family were shocked when the duo decided to open car service centres in India. “This is where one has to break mindsets,” says Gummadi. “To be a top class service network, you also need processes and not just do what others do conventionally.” Their model attracted a $5 million in funding from IndoUS Ventures (Kalaari Capital). “The way they approached the problem of solving the whole customer experience and the fact that India is a growing car market makes their business solid,” says Kumar Shirlagi, managing director of Kalaari Capital.

Customer experience is the key to Vahan’s success. “The car is delivered mostly in day or in 36 hours,” says Pramila Kumar, a car owner in Bangalore. “One needs to be spot on in dealing with the customer if she has to return,” says Akshay Bhalla, managing director of Protiviti Consulting. The growth of independent car service centres is a “global phenomenon and is bound to be a trend in India as well,” says Paul Glantz, chairman, Emagine Entertainment. Glantz is an angel investor in Vahan.
With the backing of these big names, Vahan is set to play a key role in the business of car servicing, especially with industry body Siam forecasting that by 2020, India will be selling over 6 million of them every year. For Vahan, it’s the right time to step on the gas.