On this day: Bangladesh registered their 1st ODI series win against South Africa

On this day: Bangladesh registered their 1st ODI series win against South Africa

New Delhi [India], July 15 (ANI): Five years ago on this day, the Bangladesh cricket team won its first bilateral ODI series against South Africa.
The series win against South Africa was also the Tigers' fourth successive series triumph at home.
South Africa toured Bangladesh in 2015 to play three ODIs, two T20Is, and as many Tests.
South Africa won the shortest format series 2-0. But Bangladesh bounced back in style to clinch its first ODI series win against the Proteas even after tasting the defeat in the first ODI.
In the third ODI, which was also the series decider, Bangladesh dominated the Proteas in every department and folded them to a paltry 168 runs. The Tigers then romped up the target with 13.5 overs to spare. 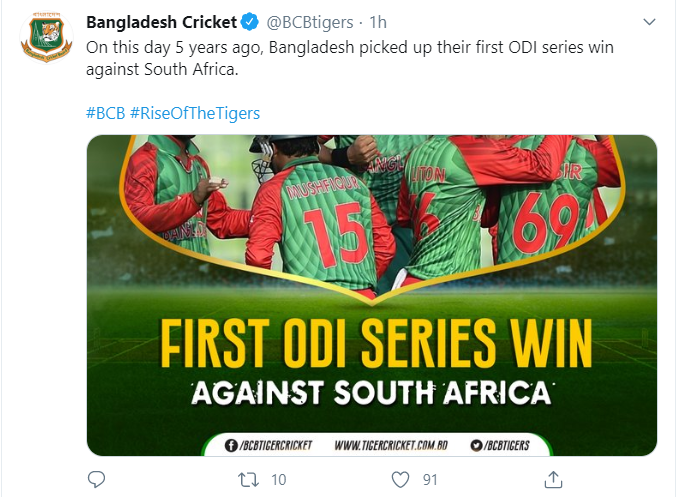 In the match, Tamim Iqbal and Soumya Sarkar stitched the best partnership (154 runs) for Bangladesh against South Africa. Also, Shakib al Hasan and Mashrafe Mortaza both picked up their 200th ODI wicket in the game. (ANI)