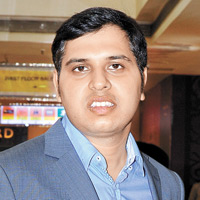 B-schools turn ordinary graduates into well-rounded managers who go on to make their employers a pile of money. This fetches them (some of them, at least) fat salaries, ESOPs, club memberships, etc. But that is only half the picture. There are some who emerge from B-school as risk takers, with an appetite for trying their hand at businesses that are out of the ordinary. They shun the routine, the mundane... in short, the safe option. They are the ones who go out on a limb and do what they really want to. BW’s Shrutika Verma and Vishal Krishna bring you entrepreneurs who have leaned heavily on B-schools to be able to walk down their unique business paths. While their businesses are very different, they have one thing in common: the will to succeed. One has turned to retail services, another to making wind energy cost-effective. A third has looked up to God, literally, for answers, while another set of entrepreneurs has used technology to find answers for local advertisers. Here are a few of the extraordinary enterprisers...