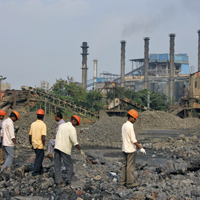 08 November, 2014
Print this article Font size -16+
A few hundred metres from the high walls and barbed wire guarding billionaire Naveen Jindal's upcoming steel plant, a dozen men have gathered at a tea stall. Their plan for this and every day: disrupt any attempt by Jindal's company to lay a water pipeline. The men, from villages near Angul in Odisha, have twice scuttled efforts to lay the pipeline in protest against Jindal Steel & Power's unwillingness to increase compensation and offer permanent jobs for taking over their land.
"The company doesn't come clean on exact terms. Revenue officials say: let work get done, we will resolve this later," says Sukanta Kumar Pradhan, the sarpanch, or headman, of Kankarai village. "What else can we do?"
Jindal's biggest project, which will eventually comprise a 12 million tonne per annum steel plant and a 2,400 MW power plant, is hampered by a barrage of protests by displaced locals, stalled mining approvals and delays in environmental clearances.
The project, estimated to cost $10 billion, is one of several that are similarly held up in the state. Tata Steel, India's largest private steel-maker, has scaled back plans announced in 2004 to build a $6.3 billion plant. The downsized project is slated to be completed in 2014. A $12 billion steel plant to be built by South Korea's POSCO, agreed in 2005, has been stalled for years.
Read: A Graveyard Of Dreams By BW"s Gurbir Singh
Odisha, formerly called Orissa, lies in the heart of India's mining belt and holds a third of the country's iron ore reserves, a quarter of its coal, half its bauxite and more than 90 per cent of its nickel and chromite. The state accounted for about a fifth of all industrial investment proposals in India in the last four years.
Since January 2008, Odisha has attracted investment proposals worth $210 billion. Besides Tata, Jindal and Posco, investors include global heavyweights such as ArcelorMittal and Vedanta Resources.
In addition to the mineral wealth, Odisha lies on India's east coast and provides easier access to the sea than other mineral-rich areas in the interior. But Odisha is also one of India's poorest states, plagued for decades by Maoist groups that use violence to destroy infrastructure and disrupt industry.
Most industrial projects have been stalled over land acquisition issues, accusations of corruption, environmental violations and a popular backlash against industry. Some have been dramatically scaled back.
"It's broadly a reaction to the kind of business practices that have been done in these areas previously," Jahangir Aziz, senior Asia Economist at JP Morgan, said of the backlash that has resulted in delays. "It is focused on land acquisition and environmental violations, but the underlying reason is that there has been unfettered mining that has impacted livelihoods. That is why people are far more cautious."
Mineral-Rich, Poverty-Stricken
Since it first made a push to attract industry in the late 1990s, the number of people in Odisha living in poverty, defined as earning less than $13 a month, has fallen to around 40 per cent of its 42 million people from close to 50 per cent. Overall, India's 1.2 billion people had a poverty level of 30 per cent in 2010 and Odisha counts among the poorest of its 28 states.
Industrial projects were expected to generate employment, but not enough locals can do the work, meaning large groups such as Jindal and Tata must source more than a third of their skilled labour elsewhere. "The prime attraction of industry for people is employment, but that is not materialising," said Biswajit Mohanty, an environmental activist.
Odisha will be short of 4 million skilled workers by 2026, an Ernst & Young study predicts. Many residents also complain they don't get adequate compensation for their land, that water is diverted from farming to industrial projects, and that, in general, there is a big gap between what is promised to displaced persons and what is delivered. "There is no connect with people's needs," Mohanty said.
By comparison, more developed states like Maharashtra or Gujarat have been able to advance industrialisation with popular support, he said.
Political Will
Critics have long argued Odisha's pro-industry policies are biased towards large companies, and its eagerness to sign agreements opens it to corruption. That can in part explain a project-implementation ratio of only 39 percent, compared with a national average of 45 per cent, estimated by ProjectsToday, a local industry magazine.
"They are simply looking to garner cheap minerals for their long-term benefits," said Mohanty, who has dragged several companies, including Vedanta Aluminium, Jindal and Essar Steel to courts or regulators over alleged violations.

Opposition politicians and environmental activists in the state blame Chief Minister Naveen Patnaik, who has been in office for nearly 13 years and is widely described as autocratic, for mishandling the push to industrialise. Patnaik, who leads the regional Biju Janata Dal party, did not reply to interview requests.
Sahadev Sahoo, a former chief secretary, the top bureaucrat in the state, said the local government does not have the resources to communicate the benefits of industrial projects to local people: "The land issue should be handled by political parties through their ground-level workers, not by bureaucrats," he said.
Game Of Perseverence
Outside Jindal's Angul plant, villagers have again used peaceful protests to block the pipeline, a course of action they will continue until demands are met, the headman, Pradhan, said. Jindal in turn, says it has settled displacement issues on most of the area for its scaled-down 6 million-tonne steel plant and 900 MW power plant and has paid an additional amount to villagers.
"The delay in (the) project is due to several other reasons whereby land sellers, even after receiving their compensation, demand more price retrospectively," the company said in an e-mail. It has previously blamed "vested interests" for blocking the water line, media reports said.
About 130 km (90 miles) away, Tata Steel's Kalinganagar plant is under construction after years of delay. After eight years and huge cost-overruns, it is still struggling to displace settlers and has no mining approvals. Faced with surging demand, Tata started work on a 3 million-tonne unit — half the originally planned size — which it hopes to complete by 2014.
Odisha has asked others, including POSCO, whose long-stalled steel plant has come to symbolise the frustrations of foreign industrial investors in India, to scale back plans in order to get projects back on track.
"We are looking at how project sizes can be reduced, existing acquired land be used, or any other solution found," said Rajanikant Singh, Odisha's steel and mines minister.
While the problems are particularly acute in Odisha, neighbouring mineral-rich areas are similarly affected. In Chhattisgarh, second only to Odisha in garnering investment proposals, dreams of turning into a power-hub are gradually evaporating, with only a fraction of the planned 60 power projects likely to be operational soon.
It has turned to non-mining industries and recently held roadshows to attract investment in sectors such as information technology, automobiles, pharmaceuticals and food processing.
Scores of projects in neighbouring Madhya Pradesh and Jharkhand are also languishing due to delays in land acquisition or mining clearances. "It's a game of patience and perseverance," said Sajjan Jindal, chairman of JSW Steel, whose project in neighbouring West Bengal has been stalled over mining approvals. "The large projects will definitely come. When, I can't say."
(Reuters)
Tags assigned to this article:
vedanta news 6 metals and minerals mining sail tata steel arcelormittal posco iron ore orissa jsw steel naveen jindal essar steel steel plant odisha angul