Chandikhol (Odisha) [India], September 23 (ANI): Thousands of protesting farmers blocked National Highway-15 in Odisha's Chandikhol district, demanding compensation for crop damages caused by floods and the withdrawal of the new farmer's bill.
The highway was blocked for over two hours on Tuesday.
"We are protesting two main issues - the new farmer's bills and the compensation for the damages caused by the recent floods," Akshaya Kumar, National Convenor of the Navanirman Krushak Sangathan told ANI. 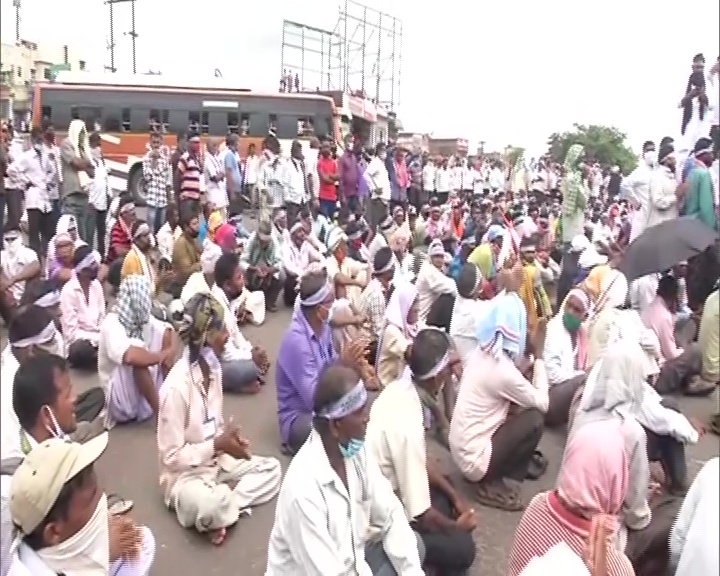 He further said that they also demanded that each farmer be given a compensation of Rs 15,000 to Rs 7,500 for each acre of land that was affected by the flood.
"As per the relief code, each farmer should get Rs 2,000 for each acre but several farmers have spent over Rs 15,000 per acre. We are demanding at least Rs 15,000 compensation per acre to all flood-affected farmers and Rs 7,500 to small and marginal farmers who are cultivating and sharing the lands of other farmers. We also demand permanent solutions for the severe floods, drainage of flooded waters and irrigation facilities for all," Kumar added.
Jajpur Additional District Magistrate reached the spot and requested the farmers to withdraw the strike. "We have already sanctioned an emergency relief and it will be given to the farmers immediately. We have taken their memorandum and will do whatever we can to help the farmers," he told ANI. (ANI)