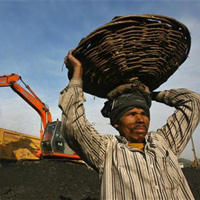 08 November, 2014
Print this article Font size -16+
The Odisha government has said it has imposed Rs 67,900 crore penalty on 103 mines for excess production of iron ore, but denied any mining scam while blaming the Indian Bureau of Mines for its failure to detect the irregularities. "We have imposed penalty on major mining companies. So far, 103 mines have been asked to pay fine totalling Rs 67,900 crore for indulging in excess production of ore," Steel and Mines Minister R.K. Singh told reporters.

While 61 mines had earlier been asked to pay Rs 47,805 crore as fine, Rs 20,095 crore penalty was imposed on 42 mines a couple days back for excess mining, he said. Meanwhile, Union Minister Srikant Jena in New Delhi demanded resignation of Odisha Chief Minister Naveen Patnaik alleging his "direct" involvement in the "mega loot of minerals". Stating that Rs 58,000 crore penalty has been imposed on companies, jena said: "The Chief Minister is hand in glove with the miners."

"The scam would not have happened had the Chief Minister not (been) involved in the scam," Jena said in a press meet. Singh, however, denied any scam and said these were just violations. "Violation of laws is not exactly mining scam. The mining companies are very much in the field and we will collect penalty for their wrong doings," he said.

"As IBM did not take action, the state government was forced to impose penalty. We are hopeful that the erring companies would pay the penalty in order to avoid further action against them," Singh said rejecting the allegation that state government's actions were delayed and intended to gain attention of Justice Shah Commission of Inquiry.

Jena, a senior congress leader from Odisha, claimed that the size of the 'mining scam' was much bigger and could be pegged at Rs 4 lakh crore, more than the size of the recent unearthed scams put together in Karnataka and Goa. Lashing out at the Patnaik government, Jena said the state was "sitting idle" since 2003-04 and failed to rein in the "rampant irregularities" in mining even after repeated prodding from his party.

The Union Minister of State (Independent Charge), Statistics and Programme Implementation and Chemicals and Fertilisers, said if the Patnaik government had taken corrective measures, the miserable economic situation in Odisha, where more than 60 lakh out of the total 84 lakh families live below the poverty line (BPL), would have transformed into one of the richest states in the country.