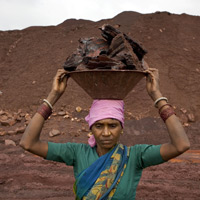 The Supreme Court ordered the closure of nearly half of Odisha's 56 mines two weeks ago due to the non-renewal of years-old leases. The closed mines accounted for about half of the state's output of more than 70 million tonnes last fiscal year.

"The brief halt in operations will not have much of an impact on our yearly output," said Mohanty. "We'll be able to make up for it."

Fearing a prolonged shutdown as in some other states, some steelmakers such as JSW Steel have bought low-quality iron ore from Goa, which usually exports most of its output to China, while others had considered imports to maintain supplies.

Of the mines that have been allowed to reopen, four belong to Tata Steel, three to SAIL and one to OMC. The mines produced about 20 million tonnes last fiscal year. Mohanty said Odisha was expediting renewals for the rest of the mines.

If iron ore was needed to cover any shortages, India's largest producer NMDC Ltd said late last month it was ready to raise sale volumes by 5 million tonnes above its target of 32 million tonnes for this fiscal year.

Restrictions aimed at curbing illegal mining in Goa and Karnataka states have choked the iron ore industry, with India's production falling to 136 million tonnes in 2013/14 from a peak of 218 million in 2009/10, according to industry lobby group ASSOCHAM.

India was once the world's third largest exporter of iron ore, sending out more than 117 million tonnes in the fiscal year through March 2010. It slipped to No. 10 last fiscal year, with exports estimated at less than 20 million tonnes.