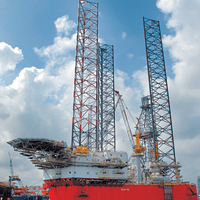 08 November, 2014
Print this article Font size -16+
Shares of oil and gas companies rallied on Friday after the government approved a doubling in domestic gas prices from next April, signalling its intent to make the country's troubled energy sector more attractive for investment.

Shares in the largest state producer, ONGC, jumped 5.4 per cent in early trade, while Reliance Industries which operates the country's biggest gas block off the east coast along with BP Plc rose 3.4 per cent in a strong Mumbai market.

State energy companies said the government's decision late on 27 June, to approve a gas price hike for the first time in three years would boost their profits.

Indicative pricing suggests domestic gas could double to around $8.4 per mmBtu from April 1, 2014.

"It is more than expected. We expected up to $6.7 (per mmBtu). This is really positive. It will encourage us to invest more in exploration," TK Ananth Kumar, finance director at state-run Oil India said.

The revised prices would put India roughly in line with Indonesia's $6-$9 per mmBtu, but were still short of typical LNG import costs.
Demand Vs Price
Demand for gas in Asia's third-largest economy far outstrips production, as India's desire to keep prices cheap for the power and fertiliser industries deters investment in costly producing areas and in pipelines and terminals for more expensive LNG.

India, the world's fourth-largest energy consumer, uses coal for nearly 56 per cent of its energy needs, while oil accounts for another 26 per cent. It aims to double the proportion of gas in its energy mix to 20 per cent by 2020.

The price increase is expected to be unpopular with voters ahead of local and national elections in the next 12 months, but is key to easing acute power shortages in the country, where cheap gas deters investment and keeps demand far above actual use.

Shares in gas producers jumped on Friday on expectation of a sharp increase in profitability.

ONGC expects to add about Rs 8,000 cr in profits annually thanks to the increase in gas prices, its finance head said.

Billionaire Mukesh Ambani's Reliance, which has seen a slump in gas output from its KG D6 gas fields, has said gas prices need to be increased in order to encourage further investment.