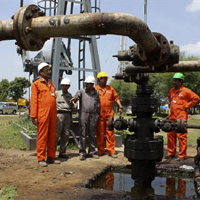 India is the world's fourth-largest oil importer, importing about 80 percent of its crude needs. It is scouting for oil and gas assets abroad to meet demand in a rapidly growing economy, and to feed its expanding refining capacity.

ONGC, which has been investing heavily to maintain output from its old fields, has outlined capital expenditure of 310 billion rupees in the financial year starting April 1.

ONGC shares ended down 1.1 percent at 283.20 rupees, while the overall market rose 0.5 percent. The stock, valued at nearly $50 billion, fell by a fifth in 2011, compared with a 25 percent decline in the main stock index.