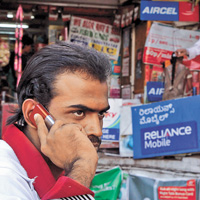 When the government finally implemented mobile number portability (MNP) in Haryana in late-November, Sirji, the protagonist in Idea Cellular commercials, probably let out a small victory cry. The brand was among the first companies to have an ad campaign on air, a few days before the much-awaited MNP became a reality.

If Idea got its timing right, others are expected to follow soon. For the first time since mobile phones entered India 15 years ago, consumers can soon change a service provider without having to forgo their treasured cellphone number. For this they have to only pay a minor fee. And in all likelihood, the network you are shifting to, will also be prepared to waive that off. The war for market share is expected to spread to the rest of the country by 20 January, the deadline set by the government for rolling out MNP across the country. As Kapil Arora, national brand head for the Vodafone account at advertising agency Ogilvy India, says, "Expect an interesting fireworks display."

And a lot of that battle is going to happen over the mass media. With 95 per cent of cellphone subscribers still having prepaid connections, mass media is the natural route, says Arora. It is not that telecom has been spending any less on mass media. Among the top 10 advertiser categories, telecom contributed to 4 per cent of all ads seen on television in the first half of 2010, according to estimates by TAM Media Research's AdEx. Telecom advertising volumes also went up by 27 per cent over the same period last year with market leader Bharti Airtel leading the advertising charts.

In this round however, it is the challenger brands who are expected to take the lead. A look at the national market shares for telecom players shows that Airtel and Vodafone have nearly 52 per cent of the subscriber base to themselves, according to the Cellular Operators Association of India (see ‘Current Scenario'). But it is Idea, BSNL and Aircel who will try to gain the most from the MNP opportunity —together the three hold nearly 40 per cent of the subscriber base.

Idea, with its set of four commercials focusing on various aspects such as network strength, customer care and so on, has already filed the first salvo. "The challenge is not only to attract newer customers but also to retain existing customers," says Ashwin Varkey, group creative director at Lowe Lintas, the agency that handles Idea's advertising. An Aircel spokesperson says the company will unveil its advertising soon.

It is not that others will take time to react. As some industry experts point out, on this occasion the industry is more than well prepared. Most companies have already done creative work on number portability as the entry of MNP has been in the offing for some time now.

So will the market leaders be left defending their turf? Arora does not think so. "This is a time to get stronger for those who are already in a strong position. We are definitely going to play on the front foot," he says.  Are Vodafone's Zoozoos in combat gear?