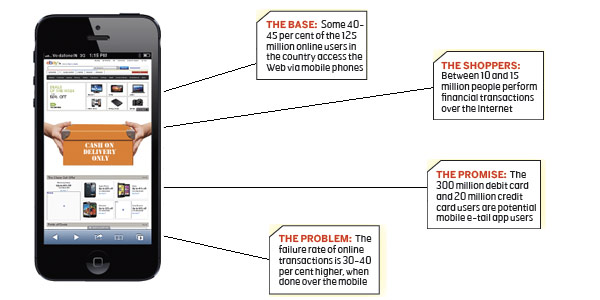 08 November, 2014
Print this article Font size -16+
On a Metro ride back home, you turn on the eBay app on your phone, flip through some pages and zero in on that pair of jeans you have been eyeing for long. The 40 per cent discount is just too good to pass up and you are desperate to order it right away. You click ‘Buy It Now’. But the next prompt does not ask for your credit card details. Instead, it asks you to ‘Commit To Buy’. You wonder what commitment it is asking for? Click and it prompts you to log in to ebay.in to pay for the product. Essentially, the app on the mobile cannot complete the transaction. You need to find a computer to do that. In case you forget to complete the transaction more than once, leave it at ‘Commit To Buy’, you will find that the trader has blacklisted you.

3q`upon, which gets nearly 15 per cent of its traffic from mobiles, is yet to launch an android mobile app in India.

Consider this: about 40-45 per cent of the 125 million online users in the country access the Web via mobile phones; but only 30-35 per cent of them transact over mobile Internet, the rest use it for research.

“I think for some time mobiles will be used only for search,” says Sundeep Malhotra, CEO of Homeshop18. He is, however, confident about a gradual shift.

With smartphone shipments projected at 156 million by 2017 (currently at 25 million), you would expect the 250-odd e-tailers to grab the opportunity with both hands — they have not.

There are two primary reasons for this. One, it’s expensive to deliver the technology. Two, Reserve Bank of India’s (RBI) step-motherly treatment towards everything to do with the Internet is forcing e-tailers to either ignore the opportunity or put together a patchwork solution (to remain within the confines of the law) that works at times, but doesn’t most often.

Thirty-year-old Praful Mathur, a pilot by profession, gets to shop for his eight-month-old kid only when in transit. But his frustration rises when apps restrict him from making payments. “I download apps for serious business, not for window shopping,” says Mathur, pointing out that there are only a couple of e-tailers selling baby products through apps.

And when, in rare instances, the apps do allow transactions, they end up annoying consumers by their long and cumbersome process of seeking multiple details — address, account, passwords. “The process of putting in card details every time you shop repels a lot of consumers,” says Arun Benty, business development head at Trellisys.net, an app development company.

Payment Challenges
Payments are an area of concern for the e-tailers. And, RBI’s introduction of the 3D secure password, while making the process safer, has added an extra layer of complexity. RBI mandates that for any domestic transaction on the Web, banks should have in place the additional authentication mechanism. This, in essence, seeks information not available on the card either by a third-level secure password or an OTP (one-time password). And the information needs to be keyed in only on a bank’s web page, making it a complex procedure to shop using the app which resides in the phone. Says Ratul Ghosh, head, strategy, at eBay India: “It is difficult and cumbersome for the user to exit the app or switch screens while in the middle of a transaction.”

Parikshit Dar, founder and director of bookmyshow.com, among the first to have a fully functional mobile app in India (it gets around 16 per cent of its business via its app), feels that the experience is far from optimised.“3D secure has made the payment system all the more complicated,” he says.

3D secure has also pushed up transaction failure rates as customers usually forget their passwords or find it inconvenient to key in so many details. “Drop-offs increase when you are moving the customer from one website to other,” says Shamik Sharma, chief product and technology officer at myntra.com, which is yet to introduce an app.

Many suggest a unified payment platform. “Every bank has a different way of generating an OTP; some banks have Verified By Visa (VBV). This adds an additional level of failure,” points out Dar.

To compound matters, PCI-DSS compliance is a time-consuming and expensive process where a company can end up investing up to $100,000 and between six and eight months to get the security clearances. “The reason why most websites do not go for this compliance is because the cost does not justify the volume,” says Groupon’s Warikoo.

Also, India still has a very low penetration of credit/debit card users. Most of the online transactions still happen via net banking where the customer will have to exit the app and open the web browser.

According to Beam Money, a mobile payment company, the rate at which customers abort transactions increases by 50 per cent if the mode of shopping is through a mobile application. “The moment a customer is transported to a bank’s website, the look and feel of the page changes and the customer loses trust. Hence, the number of people going away is higher,” says Anand Shrivastav, MD, Beam Money. Snapdeal’s product head Ankit Khanna concurs: “The failure rate is 30-40 per cent higher on mobiles.”

Most e-tailers struggling to set up a seamless transaction website have a common grievance against banks. The payment pages of banks are not customised to mobile website needs and net banking is the worst. “Since the pages are not mobile friendly, it might require the additional effort of scrolling and shifting in order to fill in the details, and customers tend to avoid them,” says Nitin Gupta, founder of PayU, a payment gateway. According to Rahul Khanna of Canaan Partners, stored wallets or an escrow account would make a lot of sense in India as there are around 300 million debit card and 20 million credit card users — but only 10 million shop online.

Too Small A Market
Again, there are those like Jabong, who believe that the market is fairly new and too small to see traction over the phone. “It is a combination of regulations and technology that is stopping transactions on apps. But, most importantly, it is consumer confidence,” says Malhotra. For Mydala’s Anisha Singh, it is the small screen size of a phone that makes it difficult to shop online.
break-page-break
Companies like Zovi continue to offer a COD-only (cash on delivery) app. Jabong too, by the next quarter, will introduce an app which will offer the COD option only. “A majority of my clients on mobile are COD customers, so it makes sense for us to give them that option till the market matures,” says Mukul Bafana, managing director, Jabong.

“Mobile commerce is still in a nascent stage. Ticket booking makes sense to the customer since it solves the problem of queueing,” says Satyen Kothari of Citrus Pay, a payments solutions provider.

For companies such as Healthkart, a user engagement app has been a priority over a shopping app. It invested in an information app, Healthkartplus, which allows customers to compare different medicines and provides detailed information on substitutes. Despite Healthkart getting about 13-15 per cent of its traffic from mobile phones and tablets, with 7-9 per cent conversions, it is yet to launch an app that allows shopping. “We prioritised an informational app that users would cherish more,” says Prashant Tandon, CEO of healthkart.com.

“Only need-based buying happens over the app. It is usually a one unit purchase… impulse buying,” explains Manoj Gupta of Craftsvilla, an online marketplace. He says that developing an app compatible with different platforms is a challenge. Most e-tailing apps in India are on Android, given its popularity.

Vodafone’s Jonathan Bill, senior vice-president, business development, India, believes that a mobile website makes more sense than an app. “At this point, no one can make money over apps, apart from gaming and utility companies. Apps do offer a rich experience, but the connection is slow and failure rates are high,” he says.

Bill is seconded by eBay’s Ghosh. “A customer can only have a limited number of shopping apps on his phone
but a website doesn’t have such restrictions.” Of the 13 products that eBay India sells every minute, only one gets sold over the phone/tablet (through the mobile website). This is in contrast with the global scenario where nearly one-third of eBay’s revenues — about $13 billion in 2012 — come from mobile apps and the mobile website.

How Some Have Done It
The success of apps from companies such as Bookmyshow and Makemytrip has encouraged other e-tailers. Homeshop18 and Groupon have managed to integrate a payment channel within their apps. Flipkart, Snapdeal and Yebhi have also attempted to incorporate payment systems on their apps.

However, experts say that in most cases, results have been far from satisfactory, given these apps have most of their data residing outside the phone, on the Web. So, every time you try and browse through a catalogue, the app connects with the mobile website and hence the experience is slow and poor. As a result, less than one per cent of all e-tail transactions in India are done on apps.

So, how do you explain the ‘success stories’? The companies are PCI compliant, which helps smoothen the consumer’s experience. This is done using WebView, akin to an inbuilt browser in the device. These companies have embeded the browser within the app and hence the Web interface connects with the bank’s page for a seamless experience.

Some e-tailers are looking to go a step further — surpass the extra layer of a payment gateway by setting up their own. Companies such as Flipkart have already set up a payment gateway, while others such as Bookmyshow are trying to set up their own. This gives them an advantage over other companies running their websites with third-party payment solutions. It reduces hassles in transaction and hence the failure rate. However, analysts are undecided on whether it is economically viable and sustainable for e-tailers companies to set up their own payment gateways.

Will your phone be a one-stop shopping solution? Not until the e-tailers are on board.