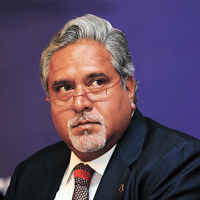 08 November, 2014
Print this article Font size -16+
The continuation of Vijay Mallya, who has been declared a 'wilful defaulter', on United Spirits board would constrain the company from raising debt in the country, according to proxy advisory firm IiAS.

The firm has advised United Spirits Ltd's (USL) shareholders to vote against the proposal to re-appoint Mallya as director on the board.

State-owned UCO Bank has also said that it was mulling options of sending wilful defaulter notice to debt-ridden Vijay Mallya-owned Kingfisher Airlines, which is now grounded.

"We are weighing the possibility of sending wilful defaulter notice to Kingfisher Airlines. The bank's exposure to the company is Rs 400 crore," CMD of UCO Bank Arun Kaul told reporters on the sidelines of CII Banking Colloquium.

United Bank of India has already declared Kingfisher a wilful defaulter while SBI, PNB and IDBI have initiated such a move.

Kingfisher Airlines and directors declared as wilful defaulters would not be able to borrow from banks in the future. They would also lose director-level positions in companies and criminal proceeding could be initiated against them, if warranted, to recover the money.

"... until this matter (regarding wilful defaulter) is resolved, Vijay Mallya continuing on the board will constrain USL's ability to raise debt from the Indian financial system," IiAS (Institutional Investor Advisory Services) said in a report.

USL is a Diageo subsidiary and can access funds support from its parent company. However, this is not an optimum way of doing business, it added.

The annual general meeting of USL is scheduled for September 3

The exchanges will shift these companies to restricted trade category or 'Z' segment from September 24.

Under 'Z' segment, no speculative trading is allowed and delivery of shares and payment of consideration amount are mandatory.

In a similar-worded circulars, the exchanges have said that these "scrips (Kingfisher Airlines and UB Engineering) will be transferred to 'Z' group with effect from Wednesday, September 24, 2014, due to non-compliance for two consecutive quarters i.e March 2014 and June 2014 for the Clause-41 of the Listing Agreement."

Clause-41 of the Listing Agreement deals with non-compliance to timely reporting of financial results.