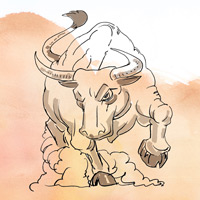 08 November, 2014
Print this article Font size -16+
Blame it all on Freaky Fridays. Arun Kejriwal, a market veteran of over two decades, smiles happily when he thinks of the money he has made in the past two weeks, when equity markets have had a sort of mini-boom. He profited from selling stocks of state-run banks.
Aneesh Srivastava, chief investment officer at IDBI Federal Life Insurance, who manages around Rs 1,300 crore of equity assets, cannot stop grinning either. Srivastava, too, bought banking stocks when the sentiment was down on them, and curtailed his position in defensive sectors like FMCG and pharma, when the BSE index was at 17500. The index is now in the range of 18600, and could go higher.
The Sensex crossed 18500-levels for the first time in 14 months (since 25 July 2011, in fact), making India the best performing market in the month among all emerging markets in the MSCI Emerging Index. Till 25 September, the MSCI India index was up 12.5 per cent for the month. (Overall, India followed Spain, which is up 17 per cent.)
“The much awaited government announcement on diesel prices and foreign direct investment (FDI) in retail and aviation has been the key reason for the Indian markets to go up,” says Saurabh Mukherjea, head of institutional equities at Ambit Capital. “It is expected that the reforms momentum is back.”
Market folk call this rally the Friday Dhamaka, which began with the hike in diesel prices. It was a pleasant surprise, announced after market hours on Thursday, 13 September. The Sensex went up 400 points the next day. Part of the rally was fuelled by short positions being covered by those caught flatfooted. When the raft of policy announcements came about on Friday — FDI in multi-brand retail, etc., — there wasn’t too much action. The market went up by just 80 points on Monday, 17 September.
The following Friday, the chief minister of West Bengal and head of the Trinamool Congress, Mamata Banerjee, pulled away her support from the central government in New Delhi. The Sensex jumped another 400 points.

Kejriwal was among those who welcomed the news but also urged caution. “The phones have been ringing off the hooks, and everyone wants to get in to the market,” he says. “People who felt left out want to catch up.”
Hand In Hand
This time round, corporate India seems to be working closely with the government to push investment in the country: the protests against FDI in retail have been much more muted. “In the next 12 months, GDP could grow at 7 per cent,” adds Mukherjea. Investment growth in India is at its low of 5.5 per cent, much below its long-term average, compared to the 10 per cent it managed in the last decade.
But here’s the big question on everybody’s lips: how long will the momentum continue? Though the Sensex may correct after a sharp rally — and it has been steady — have the fundamentals really changed for the Indian market?
“The only drag was policy paralysis,” says Srivastava. “As the political scenario changes, and with the prospects for global flows already conducive, the Indian markets are expected to at least remain firm.”
Ambit’s Mukherjea says that’s it is the first time in 20 years that he has seen the US Federal Reserve so worried about unemployment. “It will not be in a hurry to tighten rates, which means easy liquidity in the global economy that has to find markets,” he points out. The Chinese economy is in a downswing, and Saudi Arabia has promised to keep crude oil prices below $100 a barrel ahead of the US election.
The foreign institutional investors (FIIs) have been the backbone of the Indian equity market, having invested close to $15 billion till date in 2012. In fact, FIIs have been the only ones to have consistently invested in the Indian equity market. Granted that the market had not moved up despite all that investment for the last few months, but analysts say that FIIs have at least kept the markets from falling.

“Reforms and liquidity push from hereon will continue to keep our markets firm,” says Avinnash Gorakssakar, CEO at Moneyinvest-ments.in, a Mumbai-based research firm. “Already there are hints from the government and the central bank that interest rate cycle is moving down. That could fructify into an upward capex cycle.”
But Gorakssakar, too, is cautious. It is not a one-way street, he says, and investors should restrain from taking big bets in the current environment. “Keep your cool, and don’t lose any sleep if you have not been able to participate in the current rally” are his words of wisdom.
That might just be the ticket: on 27 September, Thursday, the market declined, even if just a little. On Monday, the Supreme Court, which had earlier mandated auctions for telecom, said that there was no constitutional mandate for auctions. What that implies for coal block auctions remains to be seen. Some may see that as policy uncertainty. So, for some time, the market will tread water.
mahesh(dot)nayak(at)abp(dot)in
(This story was published in Businessworld Issue Dated 08-10-2012)
Tags assigned to this article:
saurabh mukherjea magazine retail markets sensex mahesh nayak fdi fii equity market dinesh s banduni magazine 8 october 2012