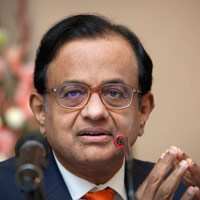 Planning Commission Deputy Chairman Montek Singh Ahluwalia went further and said India is aiming to get back on higher growth trajectory of 8 per cent as it would help in generating more jobs and promoting inclusive growth.

Addressing a press conference on the sidelines of the IMF-World Bank annual meetings in Tokyo, Chidambaram said: "I don't think there is a serious threat of a downgrade but we take the talk of a downgrade seriously. We will engage with rating agency and convince them that India does not deserve a downgrade."

Chidambaram said this while replying to a question on the possibility of downgrade of India's credit rating to junk grade by global agency Standard and Poor's in 24 months if more reforms measures were not implemented.

"They (S&P) said there is one-in-three chance over 24 months. I think 24 months is a long time. You will see lot of reforms and lot of change, and lot of strengthening of the Indian economy", he said, adding in terms of growth and potential for growth, India was way above most countries of the world.

S&P in its report on 10 October had said that there was one-in- three likelihood of rating downgrade for India within 24 months if the economic growth prospects dim, its external position deteriorates, its potential climate worsens,or fiscal reforms slow.

Talking in a panel discussion at the Tokyo meet, Ahluwalia said "We are trying to get back to 8 per cent growth and that is good for the world. In my view the central focus should be on getting growth back", he said during a panel discussion on policy options for job and growth organised on the sidelines of IMF-World Bank annual meetings.

Ahluwalia further said that focusing on growth does not necessarily mean ignoring job creation. "I don't think that getting growth back would ignore jobs nor do I think that the growth that we were having was all that anti-jobs".

Read: Worst May Be Over

The poll showed India's gross domestic product probably grew 5.6 per cent annually in the quarter just finished and will pick up speed slightly to expand 5.7 per cent in the current quarter.

Economic growth in Asia's third-largest economy probably bottomed out in the quarter to March, when it eased to 5.3 per cent from a year earlier, the slowest in nearly three years.

While weak demand from the West has hit Indian exports, the heaviest drag has come from government overspending and a lack of reforms needed to spur investment, a point made by ratings agencies Standard & Poor's and Fitch Ratings, which have threatened to downgrade India's sovereign credit rating to junk.

Foreign rating agencies have been divided in their opinion about the state of the Indian economy. While S&P believes the Indian economy to be in a bad place and vulnerable to a downgrade, some others like Deutsche Bank has reiterated that Indian equity market is the right place to invest while HSBC has pointed out that India has performed better than China. Though the level of gloom about the future business outlook moderated among the big-four emerging market economies, Indian counterparts were the most confident, the HSBC survey said.

Read: Half Empty Or Half Full

Easy Money Policy
Replying to questions on impact of easy money policy being followed by the developed world,  Chidambaram said it would not only bring more money into emerging nations but also fuel commodity prices.

"There are pluses and minuses. The immediate concern is that if so much liquidity is injected into the system, it might lead to elevated prices, especially in commodities.

It might lead to increased speculation in commodities, crude oil, wheat, cotton and metals,"  Chidambaram said.

As regards the quota reforms at the International Monetary Fund (IMF), the minister expressed hope that it would be completed by January 2013.

Once the quota reforms are carried out, India's share at IMF is set to rise to 2.75 per cent from 2.44 per cent, making it the eighth largest shareholder in the multilateral agency from its present 11th position.

"We might not meet the timeline ... I am confident that we will be able to get (IMF quota) reform done...what is important is we must get the reform done by January 2013 so that it becomes the basis of the 15th general review of quota to be completed by not later than January 2014", Chidambaram said.

In April, S&P had changed the rating outlook of India from stable to negative, reflecting the possibility of a downgrade.

India's present rating is BBB-(Negative), the lowest investment grade rating, and a downgrade would result in India's rating slipping to junk status, raising the cost of overseas borrowings by domestic corporates.

India's economic growth rate during 2011-12 slipped to a nine year low of 6.5 per cent. As per the estimate of the rating agency, the growth in the current fiscal could fall to 6 per cent.

Developing countries, including India, continue to face the fallout of the problem due to European debt turmoil, especially as exports are getting impacted. Also the easy money policies in Europe is resulting in increased capital flows into emerging markets.

"Europe has to get its act together ... What happens in the Eurozone does impact the rest of the world," said Chidambaram.