No Reason For Alarm 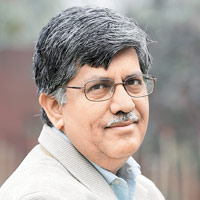 Elusive monsoons have had most people sound the alarm. But it is not that bad. If I were a cynic, I would even say that the lack of rainfall may even be a blessing for the mountain of foodgrain that will get distributed instead of rotting.

The effect of a deficient monsoon on production will be lesser than earlier. Expansion of irrigated areas has led to some protection from the vagaries of the monsoon. Some crops (pulses and oilseeds) are vulnerable, but can be imported. And we have enough cushion in rabi crops.
However, if you go by numbers, percentage change in production will be far higher than what we saw in 2009. That is because last year saw a bumper harvest. Usually prices are sensitive to output fluctuations, but there is plenty of grain in the marketing channel already. The disruptive elements (on pricing and availability) could be the higher input costs.
The direct impact of a deficit monsoon on economy will be less, though there are concerns. Two bad seasons in a three-year framework can make a big difference. Food inflation is more linked to vegetables, pulses, milk, meat, where one missed season reduces flexibility. September onwards we could see the actual impact on prices. And there could be an indirect impact on demand for goods and services.
Domestic agriculture production has cushions. It is the global drought situation that we need to monitor. Failed crops in the US (corn, soya bean) could push prices up.
The author is senior fellow, National Council of Applied Economic Research
(This story was published in Businessworld Issue Dated 13-08-2012)
Tags assigned to this article:
magazine economy foodgrains inflation commodities agriculture monsoon shashanka bhide drought magazine 13 august 2012 the agriculture issue