No Proverbial Frog This 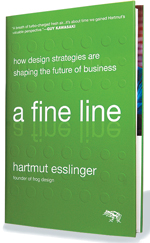 A child born in war-torn Germany is told that "all artists end up in the gutter" when folks around him see him sketching cars, motorcycles and ships all day. The boy grows up to follow his dreams, and pursues a career in design. He joins a design school, where his radio-clock design misses the approval of an awards-jury, and look at the impact of the rejection — he vows to change the world of design by "transforming its stuffy, hierarchical limits into something dynamic where anything is possible".

Welcome to the world of Hartmut Esslinger, the founder of frog design inc (the lower-cased name is the choice of Esslinger himself!). Frog has changed the way companies look at design, innovation and creativity, and in the process has changed the consumers' design sensitivities. The next time you admire a Microsoft Windows Media Player for its simplicity, or you feel good about the total brand experience on Lufthansa, or enjoy the ease of cruising on a SAP website, think, and thank, Esslinger.

Though Esslinger is intrinsically a "designer",  to tag him so would be blasphemous, and almost akin to calling Mohandas Karamchand Gandhi just another lawyer! Esslinger and frog design have contributed a lot to the success of large global corporations such as Louis Vuitton, Motorola, Virgin Mobile, IBM, Kodak, Disney, GE, HP, Citicorp, Adidas, Dell, Swatch, and many more.

Here is the story of a determined and passionate leader who has choreographed cultural change through design. This book allows us to get into Esslinger's mind to comprehend and appreciate the creative process he follows. It sets up a perspective of innovation that is, by no stretch of imagination, straight or of the kind that one normally gets to witness in the corridors of corporate power. One goes along with the author, enjoying his journey, and yet learning from him the art and science of pursuing creativity and innovation so as to influence human beings as well as bottom lines.

The author impels designers and business leaders to embrace green initiatives. He advocates radical concepts such as fusion products, open-source design and co-design within social networks, as they can improve the global viability and environmental sustainability of industrial products.

Check out Esslinger's philosophical obligation as a designer: he says we must create more human-centric conscience in science and business by rethinking our objectives. He wants corporate leaders to adopt principles aimed at social accountability and conservation. He is sure that only then will the benefits of all business efforts extend beyond the bottom-line fixation to improve the lives of people.

Esslinger also puts up a case on all that is wrong in the conventional methods and concepts of outsourcing. He says that more often than not the purported savings of offshoring and outsourcing do not show up. You just cannot shift costs between business units and locations to "magically transform" losses into "bogus profits".

As an option, the author makes a case for "smart-sourcing", where two business entities collaborate early in the developmental process and jointly bring skills to the table to develop better products rather than just better costs. The original design manufacturers, he says, are expected to bring unique benefits to the manufacturing partnership to make the entire deal mutually rewarding. The book is full of anecdotes and incidents from Esslinger's innings as the founder and leader of, arguably, the most revered design company in the world. Though the book traces Esslinger's journey as an innovator and design guru, it is not an autobiography as Esslinger is not the central character here. If at all there is a central theme, it is creativity and innovation. Each incident or anecdote is filtered to extract the wisdom from the experience. Esslinger's narrative is inspiring and thought-provoking. How else does one classify a statement such as, instead of asking ‘will we be able to sell this?' we need to seek answers for ‘how do we design something that people really want?'

So, if you are the innovation champion, CEO, change agent or chief strategist, this book is for you. There is lot to learn from Esslinger. Finally, read the book to know how the German boy proved that not all artists end up in gutter.

Author Details:
Hartmut Esslinger is founder of frog design, a leading global innovation firm. One of the most respected designers and business consultants in the world, Esslinger's work has defined the modern consumer aesthetics with revolutionary products such as the Apple Macintosh computer and Sony Trinitron television. He is professor for Convergent Design at the University of Applied Arts Vienna, Austria.