No More Hassle, Snarls At Toll Booths On Highways? 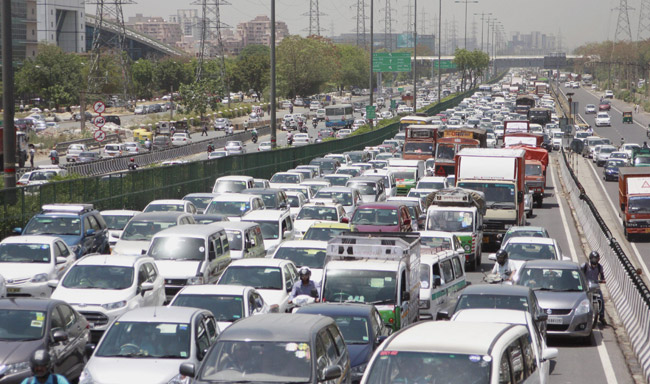 01 July, 2015
Print this article Font size -16+
Waiting at queues at toll plazas is a nightmare. The lawmakers are exempted from queues at toll plazas on highways. Now, it is time for the common man. Private vehicle owners may soon be able to zip through toll plazas on all national highways across the country by paying an annual toll charge of around Rs 2,500-Rs 3,000 without getting caught in noisy snarls snaking out from toll plazas.
The road transport ministry is set to move a cabinet proposal seeking approval of this proposal that could entail the government taking the burden of paying a substantial portion of the toll to the private developers, according to a report in The Times of India.
At present, the share of toll paid by private vehicles annually is about Rs 1,900 crore.
Unlike other parts of the world where alternative toll-free roads are available in a given route, in India there are hardly any. Those who find the user charges steep and want to take an alternative route, even if it is longer and winding, have no option. As cities expand rapidly, toll roads on the periphery, originally conceived as inter-city roads, become part of the city. The toll plan does not accommodate such changes in travel patterns. This causes hardships to users and increases resentment.

With only a few exceptions, the toll booths poorly managed, whichever way one looks at them.
First, while international service standards require passage through the tollgate in about five seconds per vehicle, the real time taken in India is usually a large multiple of that. Second, while in general there is a separation of octroi booths from normal tollgates, this is often not done at state borders, which results in delays. Third, while the toll amount should be rounded off at a convenient number, this, too, is not always done.
There have been violent protests against the toll system in some parts of the country in the past.
As many as 62 toll plazas on national highways and expressways have been closed by the government after recovery of capital cost and considering public interest, the Lok Sabha was informed in April this year.
Minister of state for road transport and highways Pon Radhakrishnan said the total revenue collected from toll plazas was Rs 9283.23 crore in 2012-13, Rs 11,436.59 crore in 2013-14 and Rs 14,214.48 crore in 2014-15.
In October 2012, former Gujarat Congress MP Vitthalbhai Radadiya allegedly brandished his gun at toll plaza staff. According to media reports, security cameras showed Radadiya getting out of his car, brandishing his weapon at the toll booth attendant. When the attendant refused to accept a photocopy of Radidya's parliamentary ID and asked for the original, the lawmaker pulled out his gun.
In June 2013, an RTI query revealed that the toll collected by some booths in Gujarat were way over what the roads had cost to build. One booth on the Ahmedabad-Mehsana road had collected Rs 391 crore against a construction cost of Rs 342 crore.
Chief Minister Devendra Fadnavis announced the closure of 12 toll plazas in Maharashtra while exempting private light motor vehicles and buses of the state transport corporation at 53 toll plazas. According to a report in Mint, the state will have to pay compensation of Rs.7,000 crore to toll operators over the next 25 years.
At present, toll rates are typically brought down to 40 per cent of the ongoing rate after the end of a concession period. Concession period is the duration for which a developer is given the contract for tolling a road project for recovering the cost of constructing and maintaining it, and is typically 20-30 years.
The Delhi High Court has recently ordered the dismantling of a toll plaza on the Delhi-Gurgaon Expressway, which had caused huge traffic jams.
However, the Mamata Banerjee-led West Bengal government has decided to draft a policy to levy toll on state highways, signalling a departure from Mamata Banerjee's well-documented aversion to the imposition of user charges. Experts say the shift was aimed at persuading reluctant private investors to develop roads in the state but added that they remained sceptical of the impact in the absence of industrialisation.
The DND Flyway, which connects Delhi to Noida, is an eight-laned 9.2 km road. It was built and is maintained by The Noida Toll Bridge Company Ltd. Commuters on the DND often caught in a massive traffic jam during pick hours.
The long-term solution, however, lies in treating roads as a public good and spending more government funds on developing them.
Tags assigned to this article:
Toll booths highways expressways nda road transport ministry