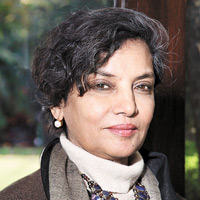 08 November, 2014
Print this article Font size -16+
I was fortunate enough to be at the right place at the right time when I started out in 1974 with Shyam Benegal’s Ankur. The parallel cinema movement had begun to spread its wings. The success of Ankur encouraged the production of more such films in the industry. It was truly the golden period of parallel cinema; peopled by a remarkable group of directors, writers, and an excellent team of actors that set foot in the industry after receiving professional training in the arts. If you look at the trajectory of mainstream cinema actors back then, they were largely people who had not received any previous training, but were learning on the job. While this required a commendable effort on their part, the acting required by parallel cinema was of a different nature altogether. Mainstream cinema required what we call ‘representative acting’, where the actors had to display broad strokes for the representation of an emotion. So if you raised your eyebrows it meant you were surprised, if you smiled broadly you were happy, if you shed copious tears you were sad — it was as straightforward as that.

Filmmakers from parallel cinema ushered in a new wave that was distinct from the mainstream extravaganzas in its narrative structure and its requirement from actors was very different. Consequently, there was a wave of change, and parallel cinema created a niche for itself. Though it did not cater to the masses, parallel cinema was warmly welcomed by a selective audience. Despite a clear divide between the two forms of cinema, I was an active part of both streams. So alongside movies such as Ankur and Nishant, I was also doing Fakira, Amar Akbar Anthony and Parvarish, which were part of the mainstream cinema and were commercially successful as well.

The ‘Her’ Story
Over the years, one prominent area that has seen change is the representation of women in Hindi cinema. The 60s saw lots of films that had women-oriented subjects, but those were largely portrayals that were within the stereotype. Silence and subservience were still considered virtues. Since mythology had a very strong role to play in our films, our ideals of the hero and heroine often came from Ram and Sita — Ram as the ideal husband, and Sita as the quietly acquiescing wife. Filmmakers were unable to reflect, realistically, the complexity of being an Indian woman in a society going through a transition. Women were portrayed in either black or white characters. There was no acceptance for any shade of grey in mainstream cinema.

During this time, the second wave of feminism started worldwide and began making its presence felt in the Indian arts and, gradually, in cinema. If you look at filmmakers like Shyam Benegal and Govind Nihalani, they were presenting an Indian woman who was distanced from the stereotype. It took time, but people slowly accepted this woman. In fact, the role of Laxmi that I played in Benegal’s Ankur was rejected by four mainstream actresses before it was offered to me. There was an assumption that the character would be seen as an anti-heroine, since it was that of a woman who has an affair with a man who is not her husband. I accepted the role instinctively, and luckily for me, the film did well and the role was appreciated.

Hindi mainstream cinema created an alternative reality which existed by whitewashing the details of the story. Very often the actress was not given a surname, to prevent the audience from locating her in a particular region of Indian society and, thereby, alienating her from others. The aim of mainstream filmmakers was to reach out to the widest possible audience. It was left to parallel cinema to base its stories in lifelike situations and characters. In parallel cinema, the actress was given a specific identity of an easily identifiable location. Unlike the mainstream, parallel cinema existed by focusing on the details.

Today, the portrayals are realistic, and more working women are visible in cinema. When women are commodified and objectified in films and advertisements, they debase themselves and counter the work that the women’s movement has been doing over the decades in creating positive images of women. Celebrating a woman’s sexuality in a robust way such as beedi jalaye le jigar se piya (rooted in our folk tradition) is liberating and entirely different from the recent so-called ‘item numbers’ that are downright crass. It’s time our heroines exercised some discretion in choices that they make in their desire for the ‘hit item number’. I am not talking about moral policing here.

Fragmented images of a woman’s heaving bosom, swivelling navel and swinging hips rob her of all autonomy and make her an object of male lust. Voyeuristic camera angles and vulgar lyrics do not celebrate a woman’s sensuality, they demean her.

Winds Of Change
Today, the lines dividing mainstream and parallel cinema are disappearing with movies such as Barfi, Kahaani and Udaan becoming commercially successful despite their unconventional storyline. The face of Hindi cinema is changing with mainstream cinema being represented largely by young, urban directors like Farhan Akhtar, Zoya Akhtar, Dibakar Banerjee and Anurag Kashyap. These youngsters make films that reflect their reality, and they are appreciated by the young audience, one that can no longer stomach the melodrama of older Hindi films. Consequently, there is an influx of good writers in mainstream cinema and actors who are choosing to work with newer filmmakers. This is creating a space for a new kind of film, one that does not have to fit under the label of either  mainstream or art. We are moving towards a categorisation process whereby the film is classified as a good film or a bad film.

Another noticeable change that I have seen is in characterisation. Actors are able to focus on a single role now, something they never had the freedom to do previously. This has happened with the corporatisation of the film industry.  Now, one is bound to the script and there is a definite work schedule according to which you are paid. This was a relief after the ad hoc quality of yesteryear — back when we used to do pre-production for a film for two months and shoot for two years. Today you do two years of pre-production and two months of shooting.

Losing Tradition
Sadly, some emerging trends are disheartening. There has been a complete erasure of the song and dance sequences in Hindi movies. There seems to be an embarrassment associated with it. As we celebrate 100 years of Indian cinema, we need to step back, recognise who we are and come to terms with our identity. Indian tradition is rooted in song and dance; it is embedded in our DNA. With the increasing popularity of the background score, lyrics are becoming redundant. It is saddening because Hindi songs go beyond cinema. Whenever one is happy or sad, joyous or heartbroken, there has always been a Hindi song that gave words, rhythm and language to the emotions which one is incapable of expressing. But now, in our attempt to reach out to a global audience, we are losing them and also a part of ourselves that makes us unique.

But all in all, I think this is a happy time for Indian cinema. Things are looking up as we progress with a new era of films that deal with real issues and characters.

The author is an actor and activist

(As told to Ankita Ramgopal)