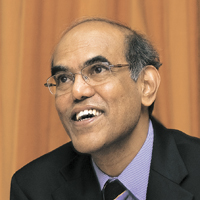 He often opts for the unexpected when it comes to monetary policy reviews, recently disappointing those looking for a cut in interest rates, and on 4 September he cracked a joke that took a bunch of news-hungry reporters and market players for a ride.

Before beginning his speech at one of the country's largest and most prestigious banking events, the Reserve Bank of India chief said in a serious tone that he had something to announce.

He then declared that he had appointed a committee to debate whether to do away with the cash reserve ratio (CRR), the portion of deposits that banks are obliged to set aside with the RBI.

Subbarao was referring to a recent public spat between RBI Deputy Governor Keshab Chandra Chakrabarty and Pratip Chaudhuri, chairman of the country's largest lender, State Bank of India, who has argued for the CRR to be abolished.

"The members of that committee are Dr Chakrabarty and Pratip Chaudhuri," Subbarao said, keeping a straight face.

"Both of them will be locked up in a room, will not be released until they have reached a conclusion, and the timeframe is that they will not submit their report before my term as governor is over."

The audience broke into laughter.

However, some reporters at the meeting didn't immediately get the joke, and sent news alerts on a possible end to CRR that sowed confusion in the bond market.

"Though there was no market impact, the market later realised and appreciated the governor's sense of humour," said one dealer at a foreign bank in Mumbai.

After his speech, a reporter asked Subbarao if his comment was just a joke. He smiled, and said: "What do you think?"