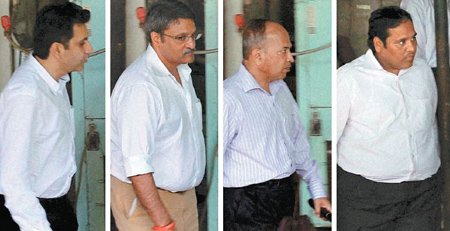 Additional sessions judge O.P. Saini refused them interim bail and gave the CBI judicial custody of these five executives for the next seven days in connection with the probe into the scandal surrounding the allocation of 2G spectrum.

The CBI had argued that the accused could influence the progress of their case against them in the scandal. The corporate executives had argued that bail was necessary to enable them to manage their business interests.Legal eagles believe the bail was rejected for two reasons. One, the Supreme Court is monitoring the case, and lower courts will be wary of perceived interventions. Two, most of the witnesses in this case are employees of their (the arrested executives') companies and the possibility of the witnesses being influenced is high."We proved in court that in such high-profile cases, witnesses get influenced," says a CBI official. "We may seek extension of judicial custody." The corporate executives have approached the Delhi High Court for bail, which is scheduled to hear the plea on 26 April.