Mumbai (Maharashtra) [India], February 22 (ANI): Bollywood star Nimrat Kaur on Monday dropped her character poster from the upcoming social comedy 'Dasvi'.
The 'Airlift' actor hopped on to Instagram to share a poster of her. The poster sees the actor dressed in a saree as she donned a chunky pair of sunglasses and smilingly posed for the camera. 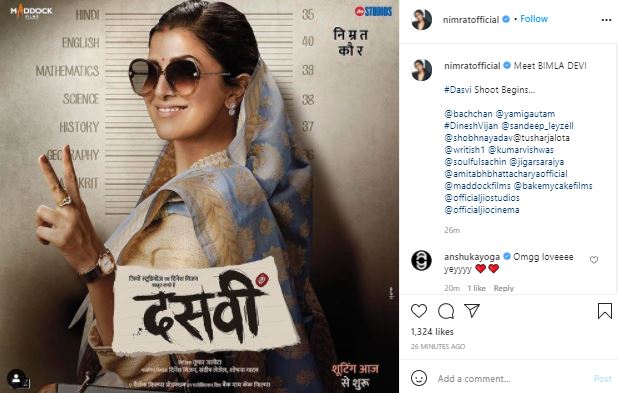 Taking to the caption, Kaur introduced her character in the film.
"Meet BIMLA DEVI #Dasvi Shoot Begins..." she noted alongside the poster.
Earlier in the day, Abhishek Bachchan and Yami Gautam also unveiled their posters and announced the commencement of the film's shoot.
The movie is an upcoming project from the makers of 'Hindi Medium',' Angrezi Medium' and 'Bala'. The hilarious social comedy also stars Yami Gautam.
Tushar Jalota is making his debut in the direction of the film, which is written by Ritesh Shah.
Jio Studios and Dinesh Vijan present 'Dasvi', produced by Dinesh Vijan, Sandeep Leyzell, and Shobhana Yadav. The movie is being produced under the banner of Maddock Films Production, and Bake my Cake films. (ANI)