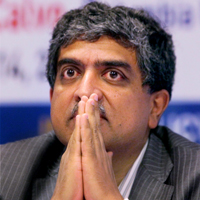 08 November, 2014
Print this article Font size -16+
Billionaire Infosys co-founder and face of "Aadhar" programme Nandan Nilekani formally joined the Congress today, a day after it made him party candidate for Bangalore Lok Sabha constituency where he is up for a tough fight.

Amid drumbeats, Nilekani, Chairman of the Unique Identification Authority of India, was welcomed into Congress by KPCC President G Parameshwara who handed over the party flag to him before he filled in the membership form at a function at party office here.

"Bangalore needs a strong champion in Delhi and I'm set to provide that," said 58-year old Nilekani, known for being part of building Infosys, started in 1981 with an initial capital of $250 by N R Narayana Murthy and others, into a behemoth that is seen as showpiece of Indian IT industry.

On his political baptism, Nilekani will take on BJP's Ananth Kumar, who has remained unchallenged in Bangalore South, winning the seat five times.

Middle-class dominated Bangalore South has been electorally hostile to Congress since the late 1970s, the sole exception being its victory in 1989 when former Chief Minister R Gundu Rao had won.

On facing a strong candidate like Kumar, Nilekani said "In every profession, politics or business there comes a time when somebody has to go, and that time has arrived."

Weeks before his formal entry into Congress, Nilekani had begun his campaign, coming to grips with ground realities as he faces a daunting task to reach out to 20 lakh plus voters with the polls in Karnataka slated for April 17.

"I think the constituency needs a clean, capable local person, somebody who has worked selflessly; ....everywhere I go there is a strong desire for change. I have got tremendous support," he added.

Asked if allegations of corruption against Congress-led UPA government would affect his prospects, he said "....it is not that the other party (BJP) has a great clean image either, we know the problems we had for the last five years in the state."

"I look forward to working with the party because party is going through change; I have been invited to be part of the change, I would like to do that," Nilekani said.

"....I'm confident that I will be an ambassador for Bangalore. I will work with all the MLA's, Chief Minister and Congress President to make sure that Bangalore gets the best deal," Nilekani said.

Stating that he is experienced in public sector, private sector and in urban governance, Nilekani said he has gained some political experience too while working for Aadhar, as he had a task of convincing Chief Ministers from various political parties to implement the scheme.

He said: "I think I bring some unique experience to the people, three major things I was part of. First from scratch I was co-founder of one of India's largest companies so I know how to create jobs and I have created lakhs of them. Number two from scratch from an idea I was part of a ID programme which gave 60 crore people identity. Third, 1999 to 2004 I was chairman of BATF (Bangalore Agenda Task Force) where I got an opportunity to go into nitty-gritty of local governance...."

"I know every detail of how a city functions, so the fact that I have diverse experience.. I'm a clean and local candidate. Therefore people should vote for me," he added.

Asked about getting the ticket for elections soon after joining Congress, whereas loyal long-time party workers are still waiting for their chance, he said, "I was going to join the party was a well known fact for long time, for the last five years I have worked with this government- they gave the political backing to me to go ahead with the Aadhar project; ....they have chosen me as the candidate to bring change into the system.

"I'm very greatful to them (Congress), it is a matter of great pride they have given me the ticket. I will serve the party as a loyal party member and will make sure that this party does well," he added.

Rules stipulate that ticket seekers should serve in the party for three years but it has apparently been relaxed in the case of Nilekani.

After demitting office as Infosys CEO in 2007, Nilekani had taken charge as head of the Unique Identification Authority of India, mandated to give a billion Indians an identity card.