Washington [US], February 26 (ANI): As the world struggles with the ongoing coronavirus pandemic, which brings a fresh supply of stress every day, we all need an escape, and what's better than tuning into some fresh music? Singer Nick Jonas' recently-released isolation-themed title track 'Spaceman' from his upcoming solo album of the same name could work as the perfect stress buster amid the health crisis.
The singer announced the forthcoming release of his new solo album titled 'Spaceman' on Thursday and dropped the lead single of the same name. The song expresses the singer's melancholy of cosmic proportions, reflecting the detached perspective that comes from having spent a year spent in isolation amid great turmoil.
Nick took to Instagram to share the title track. He wrote, "The Spaceman era has begun. So excited to be starting this journey with all of you. I made this album while doing what most of us have been doing during this past year, sitting at home getting used to the new normal, and hoping for better days ahead. There are four central themes we will explore on this album... Distance. Indulgence. Euphoria. Commitment."
He added, "Music has always connected the world and helped us to heal. I hope this music helps you on your journey through space and time... Thank you. Spaceman (the song) is officially out now and the album is available for pre-order before it lands on March 12th." 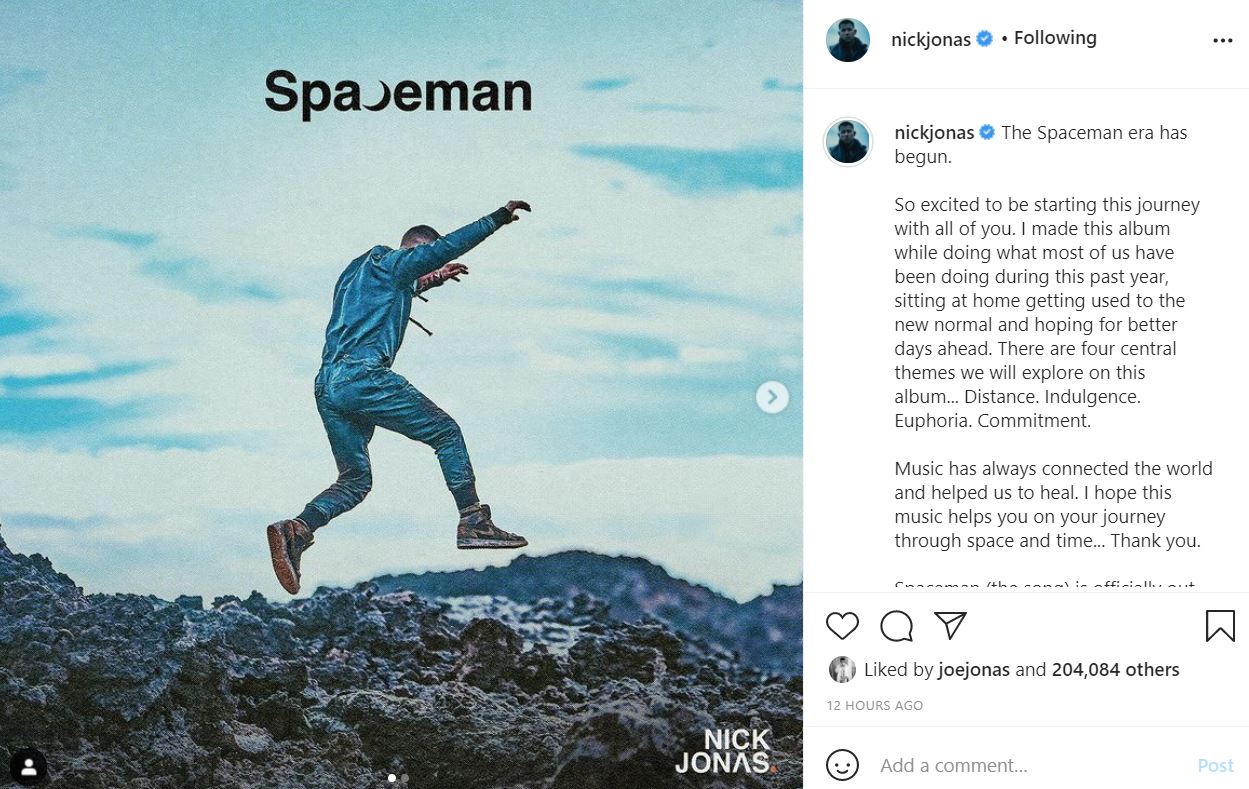 The new track's lyrics delve into the COVID-19 pandemic and the anxiety he felt during the 2020 election.
In the recently-released audio of the song, Nick can be heard singing, "They say it's a phase, it'll change if we vote / And I pray that it will, but I know that it won't / I'm a spaceman. And the numbers are high but we keep going down / 'Cause we ain't supposed to live with nobody around / I'm a spaceman."
The upcoming album will consist of 11 new songs including 'This Is Heaven', 'Sexual', and 'Death Do Us Part'. During a recent conversation with Apple Music's Zane Lowe, Nick spoke about the album's concept.
"I think the key for me was trying to find a way to give this idea a persona, give it a name. So 'Spaceman' came into my mind because I was thinking, 'What's the one thing that all of us have felt during this time?' It's just completely disconnected from the world," the Jonas Brothers band member said.
He added, "We've gotten so accustomed to looking at a screen instead of human interaction, and I think the thing that keeps us all encouraged and hopeful is just the idea of knowing that there will be a tomorrow when this isn't our reality, and I think the body of work as a whole tracks that."
The singer further said, "But it felt like the right thing to start with 'Spaceman' because it is such a stark visual and creative idea to then start the conversation of songs like 'This Is Heaven,' which I'm really excited about. It touches on some of the things I did with 'Jealous' and tracks like that, but in a new way, and just trying to continue to get better and evolve every day, push myself."
Nick, who writes several of his own songs, also told Lowe that most of his music is dedicated to his wife Priyanka Chopra Jonas.
Speaking about it, the singer said, "She loves it. Most of the songs are pretty much just love letters, which when I can't articulate the way I feel with my words with no music, I go to the studio. And I'm grateful to have that because it makes her happy, and that's most important."
Nick will give the first live performance of 'Spaceman' when he pulls double duty as host and musical guest of American show 'Saturday Night Live' this weekend. He will also reclaim one of the spinning chairs on 'The Voice' when he returns as a coach for its 20th season, which is set to debut on March 1.
'Spaceman' marks the first solo project from any of the Jonas Brothers since the trio got back together in 2019. Apart from Nick, the Jonas Brothers trio includes Kevin Jonas and Joe Jonas.
The brothers' most recent release as a group was last year's holiday single 'I Need You Christmas'. Nick's new album will drop on March 12, this year. (ANI)