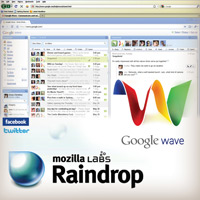 Remember the time when you were excited about a hot, new technology called email? Web-based mail started seriously only in the mid-1990s, but became an indispensable aspect of our lives within years. But a decade after its emergence as a powerful communication tool, it has also become one of the most irritating aspects of our lives. Reading emails takes time, and replying to them takes even more time. If you do not see your emails for a few days, the backlog might reach proportions that you may never be able to manage. Was this what you wanted?

The problem does not end there. If you get hundreds of emails a day, as many people do these days, you need to sort out the important ones from the less important ones quickly. If you have multiple email addresses, as is the norm too these days, it is even more difficult to keep track of them every day. In recent times, email has become just one part of your communication. You have Facebook, Twitter, Skype, Yahoo Messenger… The problem has become so serious that someone was bound to come up with a solution soon.

In the past year or so, several companies have attempted to solve this problem, but each in its own way. One of the latest attempts is by Mozilla Labs, through a project called the Raindrop. This project started about 10 days ago, and could result in the first product about three months from now. The primary aim is to provide people with the means to converse with people they care about, while reducing communication with those they do not. This is, of course, not a binary situation, and what Raindrop would do is to increase the visibility of important messages.

When ready, Raindrop would provide the means not just to prioritise our mail, but also to put all our communication in one place. It is, of course, open source, and is an extensible application; it is easily customised and enhanced. Raindrop has some overlap with Google Wave, one of whose functions is also to simplify and aggregate your communications. Google Wave, however, is also a collaboration tool for enterprises and a platform for developing distributed applications.

While we wait for Raindrop and Google Wave, a few other smaller companies are developing products that also aggregate messages. One of the most interesting is from ZenBe, based in New York. ZenBe was set up in May last year and had started a commercial service a year ago. ZenBe Mail is supposed to go beyond email by aggregating all messages. But it is also a hosted email service — with plans from $5.99-12.99 a month — that lets you keep all your old email addresses. ZenBe has also recently launched ShareFlow, a product not too different from Google Wave.

ZenBe has several competitors. Fuser, a company in Colorado, also has a product in Beta that will aggregate all your email and social network accounts. Few of these products are exactly similar, but they all have one central theme: simplify your communications. Email, in its current avatar, is probably not enough to take care of your professional communications, and probably even your personal interactions. Email is also a technology that has remained static. As some of these products evolve and become widely adopted, we could be moving towards the next wave of communication technology. In the end, it may have little resemblance to emails that we all use at the moment.