News While You Chat 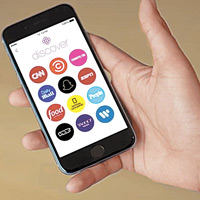 10 March, 2015
Print this article Font size -16+
With Social media becoming the go-to destination for the smartphone generation, Snapchat has launched a new feature called Discover, to connect users to not just friends but the world. Using this feature, users can find news from all over the world on the photo messaging app.
The app has a different approach compared to Facebook, which depends on its users to share news links; Snapchat brings news to its users. It has collaborated with a number of media organisations such as Yahoo, Daily Mail, CNN and Comedy Central.
As Snapchat puts it in its blog, “Social media companies tell us what to read based on what’s most recent or most popular. We see it differently. We count on editors and artists, not clicks and shares, to determine what’s important.”
Much like the short-lived nature of Snapchat’s photos, the edition of news too changes every 24 hours.
All news items on Discover have full-screen photos and videos and long-form layouts. The stories do not link back to the original websites, but are contained within the app itself.
This move by Snapchat is seen as an attempt to redefine how content is shared by the smartphone generation, which likes content that is adapted to the mobile screen.
It has taken forward the notion of young people consuming news on mobile phones to come up with a platform where the content stands out for itself. The company blog post adds, “Snapchat is aiming to build a storytelling format that puts the narrative first [as] this is not social media.”

Internet For All
Following the Internet.org summit in Delhi last year which Facebook founder Mark Zuckerberg attended, the social media network has launched the Internet.org app in the country in partnership with Reliance Communications.
The app will allow users to access services such as news, travel, local jobs, sports, maternal health and local government information. The aim of the app, already available in Ghana, Zambia and Kenya,  is to make the Internet accessible to millions of people in the country.

Big Game
Media trackers say the India versus Pakistan Cricket World Cup 2015 match, played on 15 February at the Adelaide Oval, witnessed a spate of social media interactions, with as many as 25 million posts on Facebook involving nine million users. The two most talked about players from the two teams were Sohail Khan and Virat Kohli. On Twitter, there were 1.7 million tweets about the Pool B clash of the sub-continental rivals.
Showtime
The 87th Annual Academy Awards, which aired on ABC on 22 February, dominated twittersphere, with 801,272,000 impressions, 1,438,000 unique authors and 5,923,000 tweets.
(This story was published in BW | Businessworld Issue Dated 23-03-2015)
Tags assigned to this article:
magazine social media facebook internet cnn daily mail yahoo mark zuckerberg snapchat magazine 23 march 2015 comedy central