Mumbai (Maharashtra) [India], February 10 (ANI): A day after the demise of veteran actor Rajiv Kapoor, the late star's sister in law Neetu Kapoor announced that there will be no 'Chautha' held due to the 'current pandemic circumstances.'
The 62-year-old actor and wife of late Rishi Kapoor took to Instagram and issued a statement confirming the same. 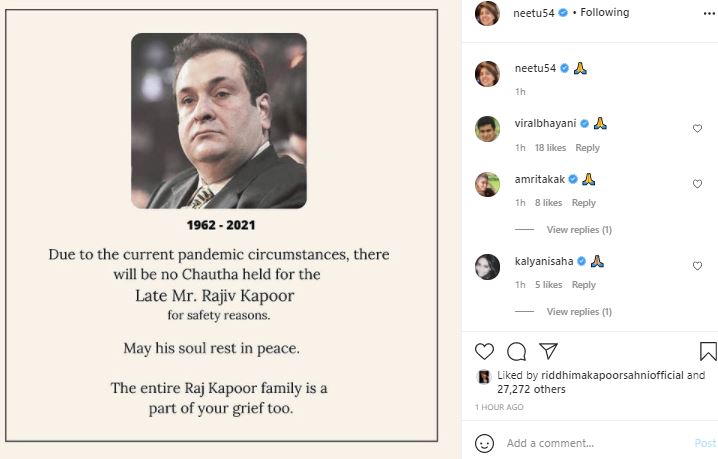 "Due to the current pandemic circumstances, there will be no Chautha held for the Late Mr. Rajiv Kapoor for safety reasons. May his soul rest in peace. The entire Raj Kapoor family is a part of your grief too," the statement read.
Late legendary actor-filmmaker Raj Kapoor's son and actor Rajiv Kapoor passed away on Tuesday. He was 58.
The 'Ram Teri Ganga Maili' actor suffered a heart attack at his residence in Chembur following which he was rushed to Inlaks Hospital. He was declared dead at the hospital.
Neetu Kapoor took to Instagram to confirm the demise of Rajiv. She posted a picture of the late actor and wrote, "RIP," along with it. (ANI)