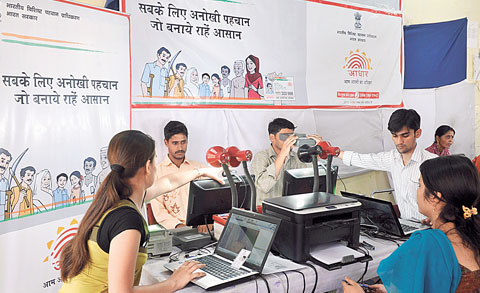 08 November, 2014
Print this article Font size -16+
Around 500 mom and pop, or kirana, shops in Delhi may soon allow you to use your fingerprint to make payments. This is provided you have sufficient cash balance in an Aadhaar-enabled prepaid Visa card issued by one of the five banks that are piloting the project. Aadhaar is the 12-digit number issued by the Unique Identification Authority of India (UIDAI).
The possibilities of the technology, developed by Visa using the UIDAI platform and tried out in the capital, is immense, says Uttam Nayak, group country manager, India and South Asia, at Visa. “This creates an opportunity for 600 million Aadhaar cardholders (as targeted by the government) to get instant bank accounts. The card can be used for cashless transactions in multiple ways, the first of its kind in the world.”
ICICI Bank, which launched the Saral Money Prepaid Card earlier this month, along with State Bank of India (SBI), HDFC Bank, Axis Bank and Indian Overseas Bank (IOB), have already tapped 125 kirana outlets  to be part of the project. The system allows Aadhaar cardholders to create instant e-accounts with any of these five banks at a nominal fee (Rs 100 for ICICI Bank). The UID number allows the bank to pull out the holder’s details from the UIDAI server to open an e-account, after a biometric authentication. The card takes a week to get activated, and can have a value of up to Rs 50,000.
The outlets must have point-of- sale machines with biometric readers or laptops connected to the Net to carry out such transactions. ICICI Bank charges Rs 20 for withdrawals using other bank channels. For person-to-person remittances, it charges 1 per cent of the transaction amount.
What made this possible was a notification issued by the Reserve Bank of India on 13 December allowing banks to accept the Aadhaar card as an identity and address proof. This will make it easy for millions of India’s unbanked citizens to access banking facilities.
The Delhi government has decided to take the Saral Card route to transfer cash to the poor families as part of its food security programme, the Dilli Annashree Scheme. The Centre is planning to push $60 billion (over Rs 3 lakh crore, if the direct cash subsidy plans pick up in a big way) into the bank accounts of the citizens and the Saral platform is perfectly designed to carry out millions of such transactions, Nayak says.
The Saral Card will function like any other debit card and can be used to withdraw money from any ATM branch, carry out Internet and mobile banking transactions, but unlike a regular bank account, customers will not get interest on the deposited amount in the e-account, nor will they be issued a cheque book.
In Delhi, the three private banks, ICICI Bank, HDFC Bank and Axis Bank, will begin their services with the kirana shops, while SBI and IOB will provide Saral Card services through their branches.
As the idea catches on across India, the prepaid system is sure to see a lot of competition, similar to what the introduction of prepaid cards in the telecom sector triggered among mobile phone operators.  What needs to be seen is whether the prepaid card revolution in the banking sector can produce the same results as the telecom sector, i.e., empower the millions who slipped through the gaps.