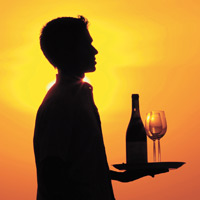 Our jamon Iberico (Iberian pork) in stewed fresh chestnuts and Jerusalem artichokes with white wine jus was a smashing encore to a choice 2006 red blend from the Uteil Requena wine region. Lamb with mint and vegetable couscous paired with a 2005 Capellania Marques de Murrieta was the coda to this pleasant course.

Segreto, The Madinat Jumeirah, Dubai, UAE
Our soiree fizzed up with champagne as we relaxed at this exclusive Italian fine dining landmark amidst lagoons and palm rows. A splendid cod salad with mozzarella cheese got us warmed to a delectable pan-seared sea bass in garlic and roast onion polenta dressing. The wine? A classy 2005 Vignamaggio Chianti red.

With a 2007 Zonin Montepulciano D'Abruzzo red in tow, we relished a Mille-feuille with Portobello mushrooms and sage gnocchi. As Luciano Pavarotti's soulful renditions stirred up passions, we dug into roasted eggplant with zucchini pesto sauce and washed down with a 2007 Brancaia Super Tuscan red. Wonders such as amaretto cakes with coffee macaroons blended perfectly with a 2001 Ceretto Langhe Monsordo Rosso.

The authors are high-end luxury travel, lifestyle and hospitality writers, and wine-awareness consultants