Nawazuddin Siddiqui thanks fans for 'huge success' of 'Serious Men'

Nawazuddin Siddiqui thanks fans for 'huge success' of 'Serious Men'

New Delhi [India], October 21 (ANI): After his Netflix release 'Serious Men,' received a positive response from viewers, actor Nawazuddin Siddiqui on Wednesday thanked fans for making the film a "huge success."
The 'Sacred Games' actor took to Instagram to share a picture of himself which had a gratitude message for his fans written over it.
"I am really Thankful to all of you for making #SeriousMen a huge success. Your love and Appreciation makes me do better and better each time. #SeriousMen #Netflix," the text on the picture read.
The actor plays the lead role in the movie which has been directed by National Award-winning filmmaker Sudhir Mishra. 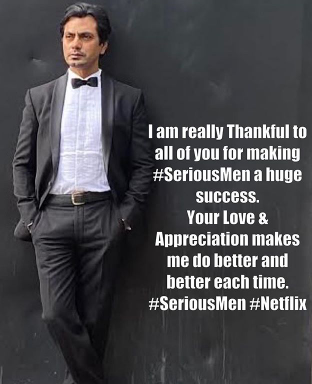 'Serious Men' is an adaptation of journalist and writer Manu Joseph's novel of the same name. It was Manu Joseph's debut novel which released in 2010.
The book is a satire that revolves around the relationship of a father-son duo from the Dalit community. (ANI)