Mumbai (Maharashtra) [India], August 10 (ANI) Actor Nawazuddin Siddiqui and Neha Sharma to collaborate with each other for the first time in filmmaker Kushan Nandy's upcoming film titled 'Jogira Sara Ra Ra'.
"#NawazuddinSiddiqui and #NehaSharma to star in a rom-com..." wrote film critic and movie trade analyst Taran Adarsh on Twitter, as he announced the new project on Monday. 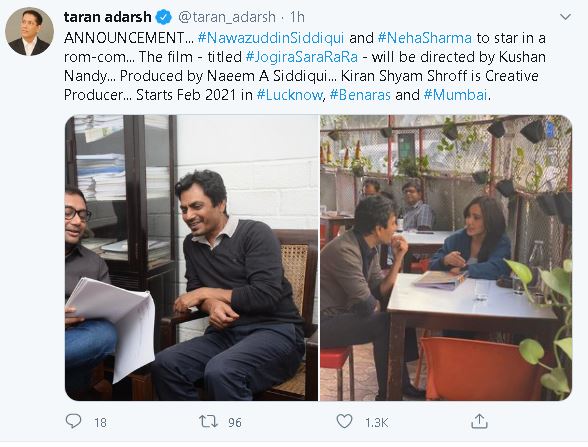 The shooting for the romantic-comedy will start in February next year at different locations including Lucknow, Benaras and Mumbai.
'Jogira Sara RaRa' will be directed by Kushan Nandy and produced by Naeem A Siddiqui, with Kiran Shyam Shroff who will be the creative producer of the upcoming project.
Nawazuddin was last seen in Netflix film 'Raat Akeli Hai' along with Radhika Apte, Tigmanshu Dhulia and Shweta Tripathi.
He next will be seen in 'Bole Chudiyan' along with Tamannaah Bhatia.
Whereas, Neha Sharma was last seen onscreen in 'Tanhaji: The Unsung Warrior'.(ANI)