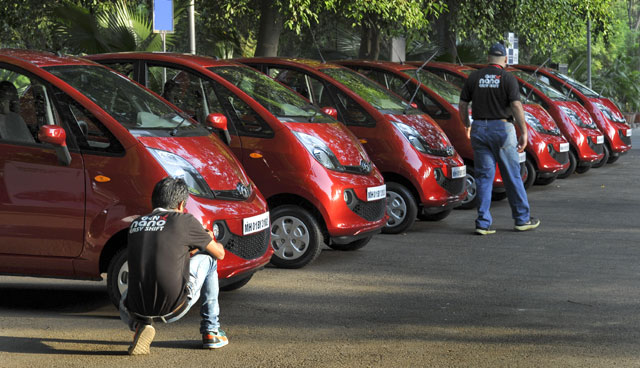 22 May, 2015
Print this article Font size -16+
When the Nano was launched first, it was criticised for being made in a hurry and customers complained about the car’s reliability. This year when the Twist was launched, it announced that the Nano platform was getting smarter and new features  were on offer. The car started offering a power steering option and a best in class audio system.
And now suddenly out of nowhere comes the game changing Nano GenX Easy Shift. This car comes with automated manual transmission (AMT) connected to a five speed gear box, which takes the clutch out of the driver’s mind. The system in package (SIP) chip operates the clutch with clever software written on top of it to connect with the gear box.
After driving the Nano around the hills, near Pune, we believe that Tata Motors has worked at turning the perception, of the Nano, around. Its 624cc two cylinder petrol engine produces 38PS of power at 5500 revolutions per minute and 51 newton metres of torque. It simply means that for a small car it can pull reasonable weight across town.
So what is new about this Nano other than AMT? To be honest, the Nano is an idea that will flow through several iterations. Being the world’s most inexpensive car, it offers several features with a basket of upgrade options. This is exactly what the GenX Nano is all about. It has a sports option that peps up the engine for young and reckless or for those who like that energy to go to their grocery store in style. There is a five speed AMT version and a four speed manual option. Clearly the research and marketing are focused towards winning a new customer and are also positioning it as the family’s second car. Only time will decide the success of the marketing strategy of the Nano.
Let us delve a bit on the features.
The engine control unit has been developed by Bosch and the AMT is designed by MagnetiMarelli. They have also made structural changes to this car and have created a safer car to drive. It has a crumple zone to cushion and a reinforced body structure to protect against frontal impact. The side doors have intrusion beams for side crash protection.
Its roomy rear seats have the name Nano embossed on them and makes interiors look sporty. It has the same premium three spoke steering wheel that goes in to the Bolt hatchback and the Zest sedan. The console is far pleasing to the eye and offers a digital cluster that shows the gear shift position on the AMT. The dash has two glove boxes and comes in Ebony for the XM and Latte color for the XT version. Theluggage compartment offers 94 litres of boot space for the AMT version and 110 liters for the manual version. Then there is AmphiStream music system which is Bluetooth enabled and is the best in the A Segment. What was surprising was that the air conditioning is really powerful and a welcome winner among all the other features.
The pricing will be announced on May 19 and if this car is anything under Rs 2.50 lakh, ex-showroom price, it is certainly worth a test drive.
Tata Motors is already working on a connected version where the smartphone and the car will interact with each other. To what purpose, you ask? Services that can be delivered, by Tata Motors, over the mobile for predictive maintenance and location aware consumer applications can change the way you drive a car in a congested city. The service will get more personal and customised. Some may say let the product work before Tata Motors makes this happen. This is exactly what the Horizon Next strategy encompasses for Tata Motors. It is a roadmap that will take Tata Motors through this decade. The Nano cannot be written off yet. The current car is already being delivered to its dealers.